The FBI, Big Pharm and the Issue of Lunatics on the Loose Who Commit Mass Murder 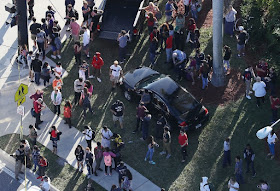 The horrifying 2/14/2018 Florida school shooting has raised a ton of questions on the issue of FBI incompetence.   Moreover, the Keystone cops look like effective and competent law enforcement compared to the FBI.  The FBI had received at least one, if not several credible tips, that Nicholas Cruz was dangerous and expressed a desire to murder students at a school.  A school shooting appears to to have been his goal.

Not only did the FBI drop the ball on checking out Cruz to ascertain if he was indeed a threat, the FBI has dropped the ball on many investigations.  In 2001, flight schools were reporting to the FBI that Muslim students only wanted to know how to make a plane takeoff but NOT learn how to land it.  Well, DUH, that's definitely a big red flag.  Being a monstrous bureaucracy, field agents had to filter these incidents up the chain of command in DC where the decision was made to DO NOTHING.  That in itself should alarm any sane person. Many field agents were furious and believed that 911 could possibly have been avoided had high ranking FBI officials in DC not ordered field agents to BACK OFF and NOT follow up with an investigation.

Joe DiGenova, a former US Attorney, is a routine guest on the Tucker Carlson show.  DiGenova knows the FBI and how it operates quite well.  He praises the field agents whom he views as mostly hardworking and competent but he had nothing but contempt for the FBI Directors and its high ranking officials who occupy the 7th floor of FBI HQ in DC.  These power players put politics above everything, even national security, something that was proven to be clearly evident in the FBI and DOJ scandals involving high ranking Clinton loyalists actually working inside the FBI and DOJ to spy on Trump and do it with a 'dossier' that Hillary Clinton paid for.  Even the creepy James Comey called the dossier 'salacious and unverified' but used it anyway.

As light is finally being shed on FBI incompetence, we are finally learning a whole lot more about what was once perceived and respected as the most honorable and competent law enforcement agency in the world.  These days the FBI is barely even a parody of its former glorified self.

On the horrifying tragedy that occurred in Florida on 2/14/2018, there were indeed a ton of red flags including the fact that the police had been called to the shooters house 39 times.  Those who knew him in school either didn't like him or were afraid of him   More, alarming the FBI had been notified that Nicholas Cruz was dangerous; yet the FBI did NOTHING.


The FBI was warned last month that Nikolas Cruz was an armed psycho who might shoot up a school — but it didn’t bother investigating, the agency admitted Friday.

“A person close to” Cruz called the agency’s tipline on Jan. 5 and reported the 19-year-old had a “desire to kill people, erratic behavior, and disturbing social media posts” and there was “potential of him conducting a school shooting,” the FBI said in a statement.

But the agency said it failed to pass on any of that information to its Miami field office, even thought its own protocols say he “should have been assessed as a potential threat to life.”

Florida Governor Rick Scott was so upset that he demanded the resignation of FBI Director Christopher Wray, here.

I'm increasingly convinced that the government simply allows lunatics to remain on the loose and buy guns in the hope that they will commit mass murder with firearms. The FBI isn't incompetent, it's got an agenda and that agenda is to allow known nutjobs to terrorize and murder Americans. The end game is to get Americans to BEG the government to forcibly seize all privately owned firearms.

Besides knowing about the Florida School Shooter and the potential danger, the FBI also knew about and botched other investigations involving mass shootings, terrorism and slaughter.  Mass shootings and/or domestic terrorism tends to be either very disturbed Americans (possibly under the influence of Big Pharm and psychoactive drugs) or Muslims with a jihadist mission.

The Ft. Hood massacre shooter, Army Maj. Nidal Hasan, had been communicating with terror groups and the FBI and US military knew it. Hasan murdered 13 and wounded dozens.

The FBI botched the background checks on Dylan Roof and approved his purchase of firearms. Roof used those weapons to shoot up a black church and murder 9.

The FBI knew that Omar Mateen, the Muslim who murdered 49 at the Pulse ightclub in Orlando, had pledged allegiance to ISIS. He was allowed to purchase firearms despite known Islamist and terrorist ties.

The FBI knew that the Tsarnaev brothers who committed the Boston Marathon bombing (3 dead, many lost limbs) were Islamist sympathizers. In fact, Russia even warned the US that they were terrorists.

The San Bernandino shooters who murdered 14 and wounded 22, were also known Islamist sympathizers. There were plenty of red flags on that jihadist married couple Syed Rizwan Farook and Tashfeen Malik. They traveled to Saudi Arabia, attended a radical mosque in CA and when the neighbors complained about strange thing going on at their residence, nobody did anything.   In fact, many neighbors were afraid to do anything for fear of being accused of being anti-Muslim.  US intel agencies and the FBI failed to even bother to checkout what these 2 were up to.   The warning signs were there.

Then there is the issue of Big Pharm and the very real possibility that psychoactive drugs are indeed responsible for churning folks into homicidal maniacs.  The follow article documents numerous accounts of mass murder while under the influence of legal psychoactive drugs.

Fact: A disturbing number of perpetrators of school shootings and similar mass murders in our modern era were either on – or just recently coming off of – psychiatric medications. A few of the most high-profile examples, out of many others, include:

Columbine mass-killer Eric Harris was taking Luvox – like Prozac, Paxil, Zoloft, Effexor and many others, a modern and widely prescribed type of antidepressant drug called selective serotonin reuptake inhibitors, or SSRIs. Harris and fellow student Dylan Klebold went on a hellish school shooting rampage in 1999 during which they killed 12 students and a teacher and wounded 24 others before turning their guns on themselves. Luvox manufacturer Solvay Pharmaceuticals concedes that during short-term controlled clinical trials, 4 percent of children and youth taking Luvox – that’s one in 25 – developed mania, a dangerous and violence-prone mental derangement characterized by extreme excitement and delusion.

Patrick Purdy went on a schoolyard shooting rampage in Stockton, California, in 1989, which became the catalyst for the original legislative frenzy to ban “semiautomatic assault weapons” in California and the nation. The 25-year-old Purdy, who murdered five children and wounded 30, had been on Amitriptyline, an antidepressant, as well as the antipsychotic drug Thorazine.

Kip Kinkel, 15, murdered his parents in 1998 and the next day went to his school, Thurston High in Springfield, Oregon, and opened fire on his classmates, killing two and wounding 22 others. He had been prescribed both Prozac and Ritalin.

In 1988, 31-year-old Laurie Dann went on a shooting rampage in a second-grade classroom in Winnetka, Illinois, killing one child and wounding six. She had been taking the antidepressant Anafranil as well as Lithium, long used to treat mania.

In Paducah, Kentucky, in late 1997, 14-year-old Michael Carneal, son of a prominent attorney, traveled to Heath High School and started shooting students in a prayer meeting taking place in the school’s lobby, killing three and leaving another paralyzed. Carneal reportedly was on Ritalin.

In 2005, 16-year-old Jeff Weise, living on Minnesota’s Red Lake Indian Reservation, shot and killed nine people and wounded five others before killing himself. Weise had been taking Prozac.

Kurt Danysh, 18, shot his own father to death in 1996, a little more than two weeks after starting on Prozac. Danysh’s description of own his mental-emotional state at the time of the murder is chilling: “I didn’t realize I did it until after it was done,” Danysh said. “This might sound weird, but it felt like I had no control of what I was doing, like I was left there just holding a gun.”

What we need is a thorough investigation into incidents of mass murder.  How frequently do they occur when individuals are NOT on antidepressants, psychoactive-psychotropic drugs or other drugs to control anxiety?  Then compare these incidents with the documented cases of mass murder when it was known that the killer was indeed under the influence of legally prescribed drugs.

According to Wikipedia, the definition of a psychoactive-psychotropic drug is:

A psychoactive drug, psychopharmaceutical, or psychotropic is a chemical substance that changes brain function and results in alterations in perception, mood, consciousness or behavior.

That's pretty serious stuff.  Then there is the issue that Americans expect a pharmaceutical or a pill to solve all their issues and problems because they lack the ability to cope with life's routine problems.  Americans have been taught that they must be happy all the time, otherwise they are mentally ill and require treatment.  The simple truth is that humans do evolve through pain, unpleasantness and NOT always getting their way.  That's just how life rolls and it's called growing up.

America is increasingly becoming One Nation Under Big Pharm and it's becoming clearly evident that there are indeed credible links between mass murders and LEGALLY prescribed drugs.  Illegal drugs such as marijuana and other do not seem to be a factor in churning a human being into a mass murderer.

The bottom line:  most mass murderers seem to be religious nuts or folks under the influence of Big Pharm.

The hysteria over the Florida school shooting is understandable.  After all, children were mowed down in cold blood in a place that was deemed safe - their school.  It's hard to imagine a worse pain than burying your children and loved ones who died in an act of violence that makes no sense. Consequently, there are now screams for more rigid gun control and even calls for abolishing the 2nd amendment and forcibly confiscating all firearms.

Disarming law abiding American citizens won't solve the problem of mass murderers, whether they are religious fanatics or mentally ill and disturbed for whatever reason(s) . In fact, it will only make innocent folks more vulnerable and defenseless.

Before we respond emotionally to a painful tragedy, shouldn't we first investigate and find out why these horrors happen?