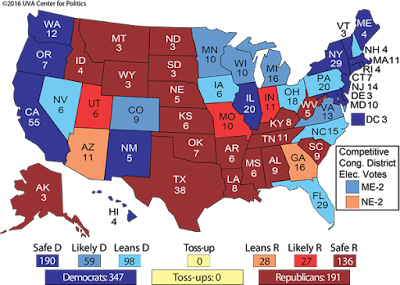 As the Hillary Clinton pimping media and their elitist loving whores bash Trump non-stop 24-7, and amid allegations of outright polling fraud, here, the 3 top elections pundits are predicting not just a Clinton victory but a Clinton whopper of a landside victory.

Larry Sabato at the University of Virginia's Center for Politics has Clinton winning 347 electoral votes to 191 for Trump, here.  It takes 270 to win and Trump isn't expected to finish close.

Nate Silver is giving Clinton a 77.7% probability of winning vs. 22.3 for Trump.  See Silver's prediction here.

Stuart Rothenberg, a liberal who joined the Trump hating Washington Post in May, 2016, is now predicting a Clinton landslide of 332-191 electoral votes, with only 15 electoral votes (North Carolina) considered a toss-up state.   Read his analysis here.

Basically, the media and its pundits absolutely believe that that any threat of a populist uprising is over and squashed.  Moreover, they are giving every swing state to Clinton.

The globalists, banksters, defense contractors, corporatists, UN and NWO folks are already popping the champagne corks in cities across America and around the globe.  They are indeed convinced that POTUS 2016 is a done deal and there is no need to fret over some populist candidate who might rain hellfire and brimstone upon their absolute powers to wage endless wars, commit genocide, reduce the American middle class to impoverished serfs and flood America with refugees and immigrants in sufficient numbers to totally wipe out what is left of western civilization and Judeo-Christian culture.

Are the elites and their media right? Well, the American people aren't noted for ballot box sanity despite some indications that We the People might be rising up to challenge them.  Who wins in November is all about who has the most powerful GET OUT THE VOTE (GOTV) machine and the Dems have a reliable and legendary GOTV machine.

Still, we live in very strange times and anything can happen. Personally, I'm not convinced that Clinton will run away with victory in November or even win.  My optimism tenuously clings to my belief that the American people will finally reject evil and do something right for a change!

The next president will be Clinton or Trump.  There are no other electable options.