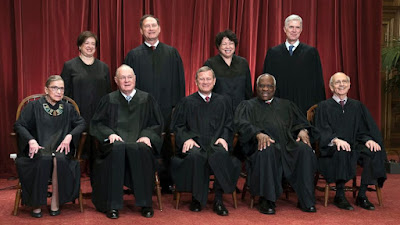 As a Libertarian leaning, Ron Paul supporting constitutionalist, I endorsed Donald Trump for president AFTER Rand Paul was out of the running and I documented my reasons here where I listed the top 10 reasons to vote for Trump. One of those reasons was the Supreme Court.  Trump replacing the deceased Justice Scalia instead of Hillary Clinton having that power was indeed critically important for liberty activists, constitutionalists and gun rights.

Many other big cases were pending and a string major conservative victories, most 5-4 decisions, has been awesome for conservatives even if it has left the left reeling in misery and disappointment.

Upholding Trump's travel ban: Let me be clear - this was never a Muslim ban and Trump himself said so.  However, it was a national security initiative to screen foreigners entering America.  There is nothing fundamentally wrong with a nation having the power to decide who gets to enter a country as nobody wants terrorists.  The left may be stroking out over this SCOTUS decision but it makes no sense for a country NOT to screen foreigners.

Upholding the right of a baker NOT to bake a cake: Call it a 1st amendment issue or a property rights issue but nobody should be forced to do anything that violates his/her conscience and religious beliefs.

Gerrymandering is an interesting issue.  When Democrats controlled most governorships and state legislatures, they heavily gerrymandered to carve out permanent Democrat majority districts.  Nobody complained except Republicans.  Well, now that the Republicans currently control governorships and state legislatures in most states, the Democrats have gone ballistic filing lawsuits that obviously are demanding that the courts restore their gerrymandering powers.  It was OKAY for the Dems to gerrymander but it's not OKAY for the Republicans to do the same thing.

The Supreme Court punted on the gerrymandering issue while refusing to intervene on behalf of the Democrats.  SCOTUS kicking this can down the road leaves open the possibility of future judicial action.

Anway, these are very important issues that have been conservatively and correctly decided by SCOTUS and only because Trump's presidential victory resulted in the appointment to the Supreme Court of a constitutionalist, Neil Gorsuch.  The Democrats love using the courts as a hammer to enforce their anti-liberty dictates.

With Trump, judicial power has swung back to the conservative-constitutional side which of course is a victory for liberty.

Posted by Judy Morris at 4:51 PM No comments: 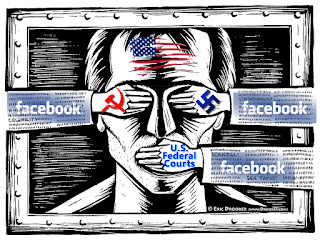 I'm possibly winding down a 3 day Facebook ban (usually my jail time bans are followed by more bans), after having 4-5 24 hour bans inflicted upon me for no justifiable reason within the last several weeks.  My crime?  I'm being accused of the generic 'violating community standards'.  Community standards has a nice ring because it invokes the hate and intolerance of the unknowable but vastly powerful collective.

Anyway, my latest ban is the direct result of a post on Yemen and how the Saudis with US help are committing a horrific genocide against the Houthi in Yemen.  In fact, the Saudis are attacking a port where 70-80% of aid for the starving Houthis comes in - that port is barely keeping the Houthi alive.  Anybody can engine search 'starving Houthi' and get a ton of gut wrenching photos of the face famine and starvation, Saudi style.  Yes, I do indeed confess to commenting that the Saudis are savages.  The Saudis also very recently bombed a Doctors Without Borders hospital in Yemen.  Even the Saudi worshiping US State Department took notice.

Calling the Saudis 'savages' is a no no on FB.

For the record, I frequently call violent thugs and goons savages regardless of religion or race.  I've called Antifa folks savages and they are mostly spoiled white liberal nutjobs.  I've called Muslims who chop off heads and slit throats savages.  I've called the neocons savages for their numerous war crimes against humanity and they are nearly 100% Caucasian white males (John McCain, Lindsay Graham, Chuck Schumer and many others in Congress).  I've also called America's warmongering Evangelicals the WARVANGELICALS because of their appetite for wars, especially wars on Muslim nations.  I've probably also called them savages.  Frankly, I'll call anybody a 'savage' if they have no respect for the rights of other human beings, if they bomb their countries, if they assault them, if they murder them, if they rape them and if they destroy property.

Thugs and goons are savages.  Period.  It doesn't matter if savagery committed in the name of a country, the state, a religion, an ideology or even an individual.

As a peace activist, I advocate AGAINST America's wars and the bombing, droning, invasion and occupation of Muslim countries.  US foreign policy only creates MORE dangerous jihadists, more instability, more tyranny and more suffering.  Over the years I have posted many article on the horrific death tolls of Muslims in Syria, Iraq, Afghanistan, Libya and other Muslim nations that have been subjected to US military interventions.

Yet and despite my activism AGAINST killing Muslims, I'm accused of the PC label of being anti-Islam because I called the Saudis savages.  Well, the Saudis are no more and no less savage than anybody who commits violence against other human beings.  Yeah, they get to hide behind their religion of Sunni Salafist Wahhabism and this in my opinion is a huge mistake.  Furthermore it's my view that everybody should be calling out the Saudis for their actions and their dastardly and murderous deeds are numerous.  The Saudis with more than a little help from the US are the kingpins behind ISIS in Syria and Iraq.  The Saudis have flooded Iraq, Syria and even Libya with Wahhabist ISIS terrorists.  Wahhabism itself is a cult of violence as well as being the most intolerant form of Islam ever to exist.  Wahhabism is a clear and present danger to the world.  It funds radical Wahhabist mosques everywhere.

Ironically, I follow a lot of Muslims and ex-Muslims on Twitter and they are TERRIFIED of Wahhabism and the Wahhabis.  There are even Muslim Imans who reject Wahhabism.  Wahhabism may not be Islam but it certainly is taking over Islam.  Then there is the Sunni-Shiite rift that has been waging for about 1400 years.  Most Sunni Muslims want to reject Wahhabism.  Syria is a 90% Sunni majority nation yet Assad who is an Alewite is popular and easily wins elections.  Why?  The Syrians are incredibly tolerant despite being a multi-ethnic, multi-religious nation.  The Sunni majority Syrians live in fear and dread of being Wahhabized which is why they back non-Sunni Assad.

I even blogged about Sunni Islam back in 2013.


While it's clear that I've been singled out for persecution by Facebook for the crime of speaking the truth, I can only draw several conclusions from this insanity.  One, Facebook is in fact a Saudi Stooge and apologist and it's functioning as a deep state operative.  Moreover, I've accused Trump's neocon War Cabinet of the same thing.  Secondly, I strongly suspect that the Facebook Gestapo has been heavily infiltrated with Sunni Salafist Wahhabists who obviously have the power to go after anybody that exposes the sickest and most vile religious ideology in human history.

Finally, all I can say is SHAME ON FACEBOOK.  Sometimes shame is effective in achieving change.  It should be incumbent on all civilized and peace loving human beings to constantly SHAME the Saudis because one thing they can't handle is bad press.  Hence the Saudi obsession with controlling the media, especially social media, is indeed very real.

Saudi power won't last forever and hopefully neither will Facebook.  Want to talk community standards Mark Zuckerberg?  I do and you have no standards.  Community standards says it's OKAY to call the daughter of President Trump a 'feckless cu*t' but it's not OKAY to oppose murdering Muslims.

Fascistbook is going full blown Nazi. May it rot in hell were it belongs.