Primaries Over, it's Trump vs. Clinton & all about Romancing the Swing State Voters. 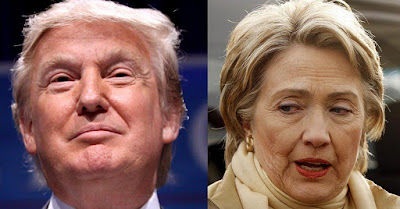 The Republican voters nominated a supposedly anti-establishment populist candidate who promises to Make America Great Again by restoring the economy with good paying middle class jobs and changing foreign policy to a far less neocon interventionist approach.  The Democrats nominated a psychopathic, bankster owned, warmongering, genocidal, neocon maniac who is likely to explode the world into more wars and even nuclear wars.

States are dubbed swing states because margins of victory can be close and they can go Republican or Democrat.  Indeed, many do in fact flip R or D but most states are reliably red or blue; hence predictability is never an issue.  Swing states however are quite volatile and romancing persnickety voters who tend to focus on specific issues while harboring zero party loyalty is indeed a challenge for candidates.

In 2016, the economy will be front and center because America and Americans cannot survive and thrive as a minimum wage economy that offshores its high wage manufacturing jobs.  Yes, other issues will come into play like foreign policy and war weary Americans are ready to embrace the 'America First' concept as espoused by Trump.

Interestingly, Breitbart had a remarkable piece on how Romney lost in 2012 and how only winning 4 swing state could have resulted in victory.  Swing state power is indeed formidable.

333,000 Votes in 4 Swing States Would Have Given Romney the Presidency

Other factors come into play like voter turnout according to the Breitbart article.  When folks aren't motivated to get out and vote, that's bad news for candidates.

Yeah, Romney was a terrible candidate who was perceived as arrogant, uncaring, indifferent and nauseatingly elitist.   Trump however built a campaign on populist rhetoric and slogans. The GOP itself must be shocked that primary turnout for Trump set a record high.

For Trump to win the general election all he really needs to do is focus on the economy and foreign policy in the swing states. Florida with 29 electoral votes and OH with 18 electoral votes are always the biggest general election swing state prizes.  Trump's highly successful 'Make American Great Again' slogan by emphasizing 'America First' is music to voter ears, especially with the poor and vanishing middle class. Trump also needs to reinforce his powerful themes by constantly attacking the corporatist trade agreements that are responsible for destroying high paying manufacturing jobs.

On his website, Trump emphatically states that he believe in free trade but free trade must also be fair trade.  None of our trade agreements like #NAFTA, the #TPP and proposed #TTIP are fair.  They are nothing more than protectionist corporatist boondoggles, 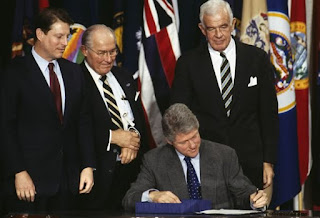 Winning in the swing states translates to winning over a percentage of voting constituencies - the black vote, the female vote, the Libertarian vote, the anti-war vote, the independent vote, the economic vote etc.  Never underestimate the power of a less interventionist foreign policy. Foreignpolicy.com actually penned an article that vigorously asserted that Romney lost in 2012 precisely because of his aggressive foreign policy.


....for Romney to win, he’s going to have to run the table with the tiny sliver of undecided independents.

And here is where foreign policy becomes a real problem for Mitt Romney — because if the Chicago Council results are accurate, independents basically want the exact opposite of what Mitt Romney is selling them.

Let’s stipulate that a President Romney might not actually do what he’s promising during the campaign — certainly the smart money doesn’t believe him. Still, based on his rhetoric to date, let’s also stipulate that Romney really wants America to lead the world. He wants to boost defense spending rather than cut it. He certainly wants to give the appearance that he would pursue a more hawkish policy towards Iran, Syria, Russia, North Korea, China and illegal immigrants than Barack Obama.

That’s great — except it turns out most of America — and independents in particular — want pretty much the opposite of that. Indeed, as Marshall Bouton says in the Foreword to the report:

Over time, Independents have become more inclined than either Republicans or Democrats to limit U.S. engagement in world affairs. Because Independents are an increasing share of the electorate, this development in American public opinion warrants attention.

Clearly, the vigorous hawk talk hurt Romney and American voters are even less susceptible to hawk talk in 2016 than they were in 2012.  Even the traditionally hawkish Republican voters rejected foreign policy hawks in the primaries and embraced the least hawkish candidate (except for Rand Paul).

For reasons that make no sense, Hillary Clinton has framed her entire campaign on a muscular foreign policy.  It's a strategy that hasn't gone unnoticed on the left or the right.

Throughout her career she has displayed instincts on foreign policy that are more aggressive than those of President Obama — and most Democrats.

Clinton is fundamentally in opposition to the foreign policy goals of the American people who seek peace and peaceful solutions to issues and problems.  Trump prefers negotiation to military intervention but Clinton is the reincarnation John McCain's BOMB, BOMB, BOMB IRAN rhetoric.

Trump holds the power to crush Clinton on the economy and foreign policy. It's all that he really has to do to win. American want peace and the restoration of good paying manufacturing jobs.