It's the Saudis, Stupid! 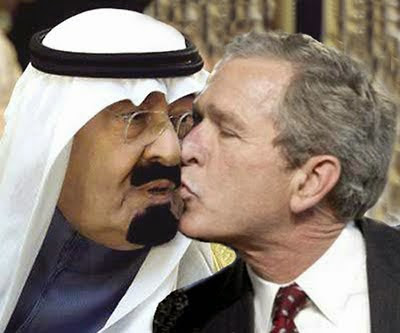 This is a repost in its entirely from a January 31, 2017 post at www.cluborlov.com; I'd post the link but a link isn't available although the post is available on the website.  It's an extremely relevant and important article about Saudi Arabia, the US, Islamic terrorism and how the petrodollar funds ISIS, Al Qaeda and other Sunni terror groups.

It's the Saudi's, Stupid!

[I am still in recovery from the book tour (which went well), so here is a timely rerun. Trump just banned entry to migrants from a list of “terrorist” countries that had been concocted by the Obama administration. Missing from that list is terrorist country number one: Saudi Arabia. It would be too much to hope that Trump will amend Obama's list, however; no matter who happens to be president, the US and the Saudis are pretty much joined at the hip.]

[Just nine days after I pointed out that Obama's latest “humanitarian” bombing puts American lives in danger, we have the video of the journalist James Foley's beheading at the hands of Daash, a.k.a. Islamic Caliphate, a.k.a. ISIS/ISIL. Well, that didn't take long! But there is more to the story: what stands behind this event, and others, such as 9/11, the Boston Marathon bombing, the Benghazi massacre and numerous other acts of terror is none other than America's best friend, the House of Saud. Here is a post by my friend Idris to explain this vital connection.] \

The recent rise of the Islamic State (IS) in Syria and Iraq, along with its bedfellow Jahbat Al-Nusra (JN) is being viewed with alarm worldwide. It is the latest in a series of problems related to Islamic extremism for which Al Qaeda is the poster child. From Somalia to Yemen to Nigeria to the Levant to Afghanistan and Pakistan, to Chechnya to Xinjiang, China and even raising its head among the populations of western countries, both Muslim and non-Muslim are facing the ravages of the Salafi/Takfiri Nexus of Jihad.

However, there has been a failure to focus on the primary cause of these problems with their various manifestations worldwide. Saudi Arabia, with able assistance from several of its Gulf neighbors (with Qatar as the most prominent) has steadfastly promoted the rise of Islamic extremism. The extreme behavior now being manifested is the result of the extremist Wahhabi ideology that Saudi Arabia promotes and the billions of dollars it has spent to influence the entire Muslim world to adopt its extremist ideology or at least to remain silent as its poison spreads, particularly among the youth.

Saudi Arabia has for decades given scholarships to universities in the kingdom devoted to indoctrinating future Muslim leaders. It has funded Masjids, schools and Islamic Centers which have promoted their vitriol and which are usually staffed by graduates of their institutions. They have thus prepared the ground for what we are seeing now, as young Muslims from around the world flock to the Levant to wage Jihad under the banner of the various groups that the Saudis have long nurtured.

The Saudis and their Gulf co-conspirators have not limited themselves to promoting their hateful ideology. They have provided billions in material support for Muslims worldwide willing to take extremist action in accordance with Salafi/Takfiri principles. Any Muslim group worldwide willing to take violent actions that accord with this extreme Salafi/Takfiri worldview finds it easy to tap into the Saudi/Arab Gulf international network to receive funding and other forms of tangible support to launch their violent campaigns.

So next time you hear that Boko Haram or the Taliban or Abu Sayyaf or ISIL or some other Al Qaeda type organization has perpetrated some atrocity in the name of Islam... be sure to thank the Saudis! Its not that there are no just causes for which Muslims may feel compelled to resort to violent resistance... rather it is that Wahhabi ideology, propelled by billions of Petrodollars, has perverted nearly every corner of the Muslim world with its fanaticism.

First they spend years priming Muslim groups with the backward, nihilistic Wahhabi ideology. Then, when frustration with their inability to achieve success (as a result of their backward, nihilistic ideology) makes these groups ready to take radical action, in come the suppliers of cash, arms, training and logistic support to make their dreams of Jihad a reality. Its a tried and tested formula that will continue to work until people realize that...

Its the Saudis, stupid!

Of course there are mischievous machinations on the part of imperial and former colonial powers to subjugate the Muslim world and in particular the hydrocarbon-rich Middle East. But both Muslims and non-Muslims need to realize that none of what we are seeing today would have been possible without the corrupting influence of Saudi and Gulf Arab sponsored Wahhabism/Salafism/Takfirism. Muslims in particular need to stop ignoring the dagger aimed at the heart of their religion by these sponsors of fanaticism. They must stop accepting their money, their books and their scholarships. It's all a poison pill!

Nor should the disguise of modernity used by those like the Qataris, who so strongly backed Morsi in Egypt, be allowed to hide their nefarious behavior. They are simply Wahhabis in suits. Just a week before Morsi was deposed, he publicly called on Egyptian youths to join the Takfiri Jihad in Syria. Muslims need to reclaim their true heritage from these usurpers.

On the other hand, Westerners should demand that their governments stop playing with fire by employing Islamic “berserkers” to do their dirty work. The blowback from their governments’ complicity with the Saudis has been extensive and includes highlights like 9/11, the Chechen Boston Marathon bombing, the consulate killings in Benghazi and the recent beheading of James Foley. Now with an entire well-armed and richly funded state spanning the borders of Syria and Iraq at their disposal and recruits flocking to their cause from all over the world, we can expect even more poisonous fruit from this tree planted and nourished by the Saudis and their helpers.

The first step to solving a problem is identifying its nature. Hence the importance of understanding the essential role that Saudi Arabia and its Gulf Arab allies have played in creating the world’s number one security problem. Thus far the Saudis, Qataris and their other Gulf Arab allies have managed to obscure the centrality of their role in spawning Al-Qaeda, ISIS/IS and their like. This needs to end!

Some people speculate that the ISIS/IS Frankenstein that they birthed may yet consume the Saudi Kingdom itself, but that would be little comfort to a world forced to deal with the furies that they have unleashed. 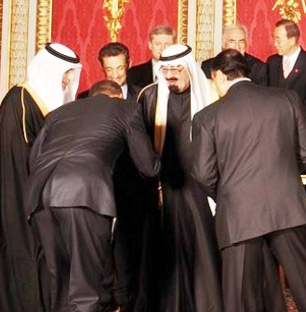