The Top 10 Reasons to Vote for Trump 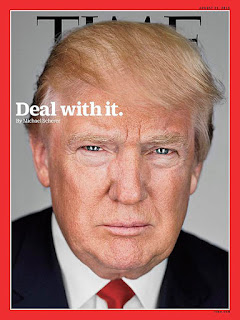 As a Ron Paul and Rand Paul supporter, I'm disillusioned with the political system, the systemic corruption of the RNC and DNC machines, the obnoxious elites of the political cesspool and their media, and every policy decision promulgated by the sellouts of America. I long for an America that works for Americans and American workers.  I also care deeply about other issues so I've outlined them and have included Trump's positions on these issues.

To be clear, Trump is no liberty activist, Libertarian or constitutional purist.  Moreover, it's 100% accurate to assume that most Americans could care less about the issues that are important to us. Liberty doesn't win at the ballot box, never has.  That said, Trump does hold positions on a lot of issues that are important to the American people to various degrees and I find myself in agreement with a lot of Trump's positions.  They hold the potential to rollback a lot of nasty policy decisions that have decimated America and American workers.  More importantly though is that Trump is truly kicking GOP establishment ass and I love it.  So do the American people.


#10 Common Core Trump has consistently blasted Common Core and vows that he is determined to repeal it.

#9 Vaccines I personally oppose forced vaccinations and do share Trump's concerns over their safety. Trump has stated that vaccines cause Autism, here, and there is ample evidence to support his assertion. Trump obviously isn't owned by Big Pharm who peddles poison.


#8 Marijuana Legalization Trump 100% supports medical marijuana and believes that the states should have the right to make the decisions on recreational marijuana.  That's a position that will make a ton of voters happy!

#7 Immigration: Trump has raised the issue of immigration. America keeps getting flooded with low wage immigrants and many of them are taking jobs from Americans who are actually getting fired and replaced with cheap foreign labor. Moreover, many of those comprising the 'cheap labor' workers are in fact so impoverished by low wages that they are entitlement dependent. I blogged about the immigration issue in depth - Let's Talk IMMIGRATION.

With 92 million Americans out of the workforce, here, I absolutely believe that we should make it a top priority to get Americans back to work.  Besides, many of those Americans are weighing down the welfare system.  Americans need jobs and if that translates to a temporary halt on immigration, then so be it - it makes sense.

There are many situations like the now well publicized Disney case where Disney fired American workers and forced them to train their foreign replacements.  Even the open border immigrant loving NYT penned a piece on this absurdity.

It's as if war has been declared on American workers who are being cast aside as irrelevant and expendable scum.  This is simply wrong.

#6 Trade Agreements America's nasty, job-destroying trade agreements that began with NAFTA and are now ballooning have decimated US manufacturing and those good paying middle class jobs. Trump is on record vociferously opposing these trade deals. Trump said "I am all for free trade, but it's got to be fair" and the "TPP is a horrible deal; no one has read its 5,600 pages".

On NAFTA, Trump says "I think NAFTA has been a disaster. I think our current deals are a disaster. I'm a free trader. The problem with free trade is, you need smart people representing you."

Trump has blasted the loss of US manufacturing jobs and the off-shoring of America's once legendary manufacturing industries that produced a prosperous middle class.

#4 Trump Is The Only Republican Who Stands a Chance of Defeating Hillary Clinton (or Bernie Sanders) in a General Election The POTUS general election is likely be close, very close, and will boil down to 6-8 critical swing states.  The POTUS kingmakers will be independent voters (they always are) and whoever can win over a percentage of the African American vote.  While the Dems tend to have a lock on both constituencies, there is no guarantee that they will vote Democrat.  In fact, polls have disclosed that 20% of Dems would vote for Trump over Clinton.

"Trump Could Win It All": 20% Of Democrats Say They'd Vote For Trump Over Hillary

20% is an incredible percentage and definitely is sufficient to swing the results in a swing state that are typically very close.

With POTUS 2016 almost entirely focusing on the economy, Trump is rapidly winning over the voters who view the economy as their top concern.  American voters are indeed very worried about their jobs, futures and prosperity because they view the present elitist run system as exclusively beneficial to Wall Street, mega-corporations and the cheap labor lobby.

#3 Foreign Policy The damn wars that have cost American taxpayers trillions are a thorn in everybody's side except the hardcore neocon nutjobs.
Trump is not a hardcore neocon like Cruz, Rubio, Bush, Clinton and even Sanders; in fact the neocons hate his guts. He's on record opposing the Iraq War and way back when Bush started the damn war. Trump opposed the Iraq War when it was popular and long before the horrors of Abu Ghraib emerged.

Not only is Trump on record opposing the Iraq War, during a GOP debate he blasted the Iraq War, its cost and the horrid damage to the Middle East:

We have done a tremendous disservice not only to the Middle East — we've done a tremendous disservice to humanity. The people that have been killed, the people that have been wiped away — and for what? It's not like we had victory. It's a mess. The Middle East is totally destabilized, a total and complete mess. I wish we had the 4 trillion dollars or 5 trillion dollars. I wish it were spent right here in the United States on schools, hospitals, roads, airports, and everything else that are all falling apart!"

For a Republican candidate to make such an anti-war statement during a Republican primary debate is no less than astounding but what is even more astounding is that his remark didn't hurt him in the least and he continued to rise in the polls despite the consternation of the neocons. I remember when Ron Paul got dissed in a South Carolina debate for suggesting that America follow the Golden Rule on foreign policy. He got booed. But the times they are a changing! Even Republican voters seem to have finally lost their appetite for never ending wars. Trump doesn't suffer in the polls when he attacks US foreign policy and on GOP sacred turf no less.

#2 Supreme Court Nominations  Few folks pay attention to this critically important issue. Even if Republicans, conservatives, Libertarians etc. seem blind to this issue, the left certainly isn't.  In fact, the left is freaking out over it because it believes that the next president could appoint 4 Supreme Court Justices.

How could the next president reshape the Supreme Court?


In the next few years, the Supreme Court may face as many as four vacancies as some of the justices age or enter retirement. That means the outcome of November's elections could be critical in determining the court's future composition.

Nearly half of the court -- four of the nine justices -- has served on it for 20 to 30 years and are either over the age of 80 or approaching it.

Who in their right mind wants Hillary Clinton or Bernie Sanders nominating up to 4 Supreme Court Justices?  Considering the extreme longevity of their lifetime tenure, a progressive takeover of SCOTUS would have profound effects on America, Americans and the constitution that would require decades and generations to undo and unravel.

While I haven't the slightest clue who Trump would appoint, whoever he appoints to SCOTUS won't be as bad as a Sanders or Clinton appointee.

What few liberty oriented and/or sane rulings that are decreed by SCOTUS presently come with 5-4 decisions. A few days ago, SCOTUS shot down an Obama's climate change order that was supposed to be implemented by the EPA in a 5-4 decision.

It's becoming increasingly apparent that Trump is succeeding in winning over Republican primary voters. Moreover, he's probably the best candidate to defeat Clinton or Sanders in a general election. Even if I hated Trump on every issued, which I don't, I'd take the chance and vote for him based on Supreme Court Justice nominees alone.

And the #1 reason to vote for Trump is to royally bitch slap the RNC-GOP elites who lord over us like a Nazified crime syndicate.  If Americans want change, a better future, the restoration of the American Dream and a chance reversing all the damage that has been done to the American people then they need to reject the bankster lovers, warmongers, open border advocates, globalists, one world government supporters, corporatists, fascists and the Republican elites responsible for destroying America (along with their Democrat partners in crime).

Is Trump the man?  I don't know but he's certainly raised a lot of issues that are very important to the American people, issues that were formerly verboten and banned from discussion by the RNC elites. Trump has given the average American a powerful voice and while delivering will indeed be a challenge, if anybody has the courage, smarts and determination to try and fix all that is wrong with America and our corrupt to the core political system, Trump is the only option.  I believe he will try but succeeding in that pit of vipers known as the District of Crime (DC) will require one tough and seasoned son of a bitch.  Trump is tough, seasoned and READY.