Howard Schultz, NEOCON, & a clear and present danger to America. 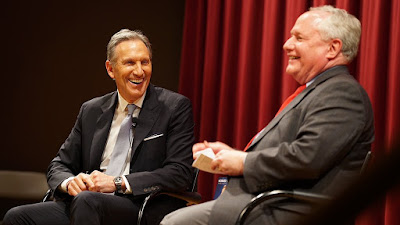 Listening to Howard Schultz, the billionaire former Starbucks CEO, can be surprisingly refreshing.  There is a lot to like about what he says including criticism of Medicaid for All which he has called unaffordable.  Schultz has also called our monstrous debt the "greatest threat domestically to the country".

Howard Schultz: The $21 trillion national debt is the ‘greatest threat domestically to the country’

“I think the greatest threat domestically to the country is this $21 trillion debt hanging over the cloud of America and future generations,” Schultz tells CNBC.

He also says “the economy is strong” and gives Trump “some” credit for the gains.

Despite his criticism for the corporate tax cuts, Schultz also had choice words for what he characterized as the increasingly left-leaning economic policies of the Democratic Party.

“I will say that it concerns me that so many voices within the Democratic Party are going so far to the left, and I ask myself how are we going to pay for all these things in terms of things like single payer [health care],” he said.

Schultz is a classic rags to riches American success story.  He grew up poor in the projects of Brooklyn and literally achieved the American dream. Although Schultz is critical of Trump's tax cuts, he's also opposed to the 70% tax rates proposed by Alexandria Ocasio Cortez aka Occasional Cortex (AOC).  AOC, a self avowed socialist-Marxist who birthed the Green New Deal, attacked the self made billionaire.

Ocasio-Cortez Slams Schultz Asking Why Billionaires Aren't 'Told to Work Their Way Up,' Prompting Some to Point Out His Background


Rep. Alexandria Ocasio-Cortez (D-NY) responded to criticism from former Starbucks CEO Howard Schultz Wednesday by wondering on Twitter, “Why don’t people ever tell billionaires who want to run for President that they need to ‘work their way up’ or that ‘maybe they should start with city council first’?”

Her tweet was in response to Schultz’s comments criticizing her proposed tax increases on the wealthy and even citing them as the reason he’s considering a 2020 presidential run as an Independent rather than a Democrat.

Schultz is a lifelong Democrat and compared to the current crop of socialist-Marxist Dems who have tossed their hats into the 2020 POTUS ring, Schultz is definitely a moderate.  As a businessman he understand the economy, job creation and a lot of what is needed to lift the poor out of poverty.

As an independent voter who voted for Trump, I'd conclude that there is a lot to like about Schultz.

However, the dude has one FATAL FLAW, he's a neocon who likes and respects Trump hating Bill Kristol.  Schultz tweeted on Feb. 14, 2019:

Howard Schultz ‏ Verified account @HowardSchultz Feb 14 More A fantastic conversation with @BillKristol at the Philadelphia @FreeLibrary tonight. Thank you to all those who attended!

Anybody who would even been seen with the evil rat bastard Bill Kristol is probably a Never Trumper and a dangerous neocon.  Kristol is a diehard neocon warmongering psycho.   Schultz has foreign policy views that are definitely more aligned with Kristol and the interests of Israel.


Schultz called the decision to pull out of Syria a strategic mistake that was not in the interest of the country. First, Trump did not communicate with U.S. allies Jordan and Israel, he said. Second, he didn’t listen to military advisers like Secretary of Defense General Jim Mattis to fully understand the consequences related to leaving.

By leaving, Russia and Iran get a stronghold in the region, and the U.S. won’t discover the full effects of that for years to come, Schultz said.

Is Schultz a neocon Israeli Firster who is determined to wage war on Iran?  It would appear so.

As an antiwar activist who voted for Trump because I thought he would be less dangerous on the foreign policy front than Hillary Clinton, a proven Saudi Stooge and neocon, I'm hardly happy with Trump on foreign policy but still view Trump as less aggressively neocon than Hillary.  She destroyed Libya and Syria to appease her Saudi-Israeli masters, and even bragged about murdering Qadaffi.  Moreover, I believe that the real axis of evil on the planet today is the US-Israeli-Saudi Alliance because it not only promotes endless Middle East wars but it also spreads the evil known as Sunni Salafist Wahhabism, the sect of Islam practiced in Saudi Arabia and spreading everywhere.  15 of the 19 911 terrorists were Saudi nationals and there is ample evidence that Saudi Arabia and/or rich Saudis funded that horrific deed.

While Schultz may be the sanest Democrat running or considering running for president, he's said that he will NOT run as a Democrat but as an independent.  Obviously, that has caused liberals and Dems to stroke out because if Scultz were to run as an independent he would indeed peel off a lot of independents and moderate Dems.  Right now the Democrat POTUS field consists of lunatics who are all out trying to 'Out Bernie Bernie' by offering even higher taxes, more government powers and the nationalization of many industries and even the entire economy.

What America really needs is a massive dose of LESS government enshrined in the principles of peace (end the damn wars), liberty (restore civil liberties & abolish the surveillance state) and prosperity (lower taxes and regulations to propel free markets).

Schulz isn't the answer - he would just feed the military industrial complex and its endless, murderous wars.

However, for anybody who loves US wars, death and destruction, Schultz is your candidate.