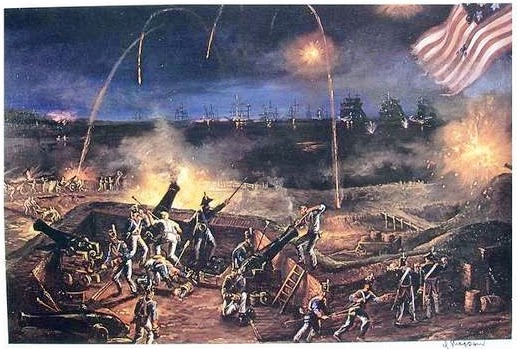 During WW I, Japanese General Yamamoto supposedly said "“You cannot invade America. There is a rifle behind every blade of grass.”

Many Americans live in fear and dread of what would happen if America didn't have a military and standing army. However, most of America's founding fathers opposed a standing army because they understood that so long as one existed dangerous psychopaths would concoct reasons to use it for endless warmongering and war profiteering.

But Americans should also be thinking about the War of 1812.  The British invaded America and headed straight for DC but those in the capital, including the military, had all fled and never even offered an honorable defense.  So the Brits burned DC and headed straight to Baltimore where they planned a land and sea invasion believing that Baltimore would easily fall.  But the Brits encountered the armed citizens of Baltimore and butted heads with 1,0000 defenders of Ft. McHenry who valiantly fought the Brits from 6:00 a.m. on September 13, 1814 until 7:00 a.m. September 14th when the British shells fell silent and "our flag was still there".  Thus, the words to the Star Spangled Banner were born as a captured America lawyer, Francis Scott Key, watched as a prisoner of war on a British ship and wrote down those now memorialized words.

Folks near and around Baltimore also valiantly fought the British land invasion.  Defeated and demoralized by folks just defending their country from a foreign invasion, the Brits immediately sailed to New Orleans where they anticipated that the undefended city would easily fall.

But the Brits were forced to butt heads with the legendary Andrew Jackson and his hastily raised rag tag army of yeomen farmers who despite being vastly out-gunned and outnumbered managed to deliver a devastating and humiliating defeat to the Brits and sent them packing.

The passion and tenacity to defend one's homeland against a foreign invader is just so much a part of the human condition that it cannot be ignored.  The ghosts of history firmly attest to the fact that our current crop of wars will never, ever be winnable.  No nation wants to be attacked, have its citizens murdered and suffer the humiliating occupation of an invading foreign military.

America's only invasion by a foreign military, the War of 1812, not only resulted in a defeat for the invader, an invader considered the most military powerful nation on earth at the time, but proved that armies do not defend nations.  It was the American people who successfully defended America and sent the British packing.