As liberals, progressives, Democrats, Republicans, conservatives and assorted others comprising the ideological spectrum ponder the acute decline of the American middle class and the hopeless suffering of the poor, it's not likely that the true reason for such national misery will be addressed.  In fact, truth is universally ignored in America.

Yes, there are a lot of moving parts to our economic woes ranging from nasty corporatist trade agreements (outsourcing US manufacturing) to massively increased socialist-statist entitlements (the welfare state) to endless wars that are bankrupting us but one factor leads the pack as the chief culprit: the destruction of the dollar attributable to Nixon de-tethering the dollar from gold in 1971 and its horrific effect on the poor and middle class.  Purchasing power has nosedived and wages, which never keep pace with inflation, have also nosedived. 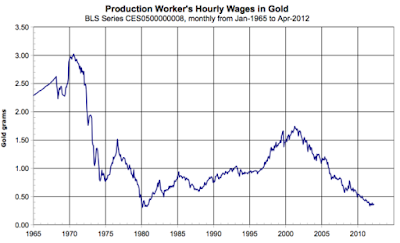 Worker wages and purchasing power peaked in 1971 just before Nixon churned the dollar into a 100% fiat currency that became the chief tool to transfer wealth from the poor and middle class to the rich. 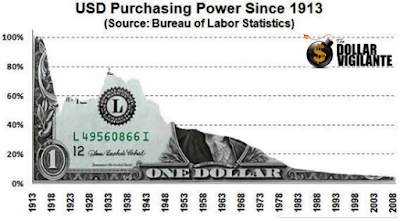 Wages need to rise to keep up with inflation, especially since the value of the dollar has been trashed,,,

According to CNN's online global wage calculator, which uses data from the International Labor Organization, the average annual salary of a worker in China's private sector was 28,752 yuan (about $4,755) in 2012, or 38% of the global average. Jan 24, 2014


While globalization has indeed benefited 3rd world nations by fostering massive industrialization and rising standards of living, it's come at the expense of western workers who can't compete in high tax and high cost of living nations.  No American can house or feed themselves on earnings of $4,755 a year. Such wages automatically qualifies a person for food stamps, Medicaid and other welfare benefits.

It's as if the globalization economy has churned the world into a form of industrial feudalism consisting of subsistence level serfs and their corporate masters.  Western corporations lobby heavily for the low wage welfare state because it effectively transfers the social costs of an employee to the taxpayers who are already severely financially stressed.  Clearly, it's a form of corporate welfare but corporations love it because it lowers their production costs and makes their exports cheaper in foreign nations.  China keeps its currency permanently devalued so that it's goods remain cheap when exported.

These are not good times for labor who is being crushed by globalization and financialization but Wall Street and the rich are doing well as the wealth of the 1% continues to grow.

Just about everybody claims to have a political solution.  Bernie Sanders is campaigning on transferring wealth from the rich via high taxation to fund a bigger entitlement state.  Sanders doesn't believe in sound currency or simply creating economic conditions wherein the poor and middle class have the opportunity to create and keep their own wealth.

The Republican nutjobs running for president are obsessed with endless wars, the American empire, growing the corporatist fascist state and the creepy social issues that fire up the war loving GOP base. Donald Trump is campaigning on "Make America Great Again" but offers absolutely nothing on how he intends to achieve such a lofty goal.

Well, there are solutions, solutions that the power hungry statist politicians despise.  There is only one way to make America great again.  Restore sound money (which effectively kills corrupt Wall Street power) and making America a safe and desirable place to park and utilize capital.  Capital will always seek and find capital friendly places - it's like a law of financial physics. We need a revival domestic manufacturing because nothing jump starts a sick and ailing economy like a factories and manaufacturing.

It's been estimated that literally trillions of dollars in corporate profits earned by US corporations are locked up in foreign banks and cannot be repatriated back to the US because of oppressive taxation. Ron Paul addressed this issue several times.  The statist liberal progressive approach is to force those profits back to American where they can be taxed and expropriated.  The free market approach is to abolish the tax penalties and allow that big pile of capital back into America to work its job producing magic.

Moreover, abolishing the corporate tax would enormously benefit America because we happen to have one of the highest corporate tax rates in the world, here, which is why US corporations keep their profits stashed away in low tax off shore banking havens.

American corporations aren't exactly paragons of morals and ethics.  They spend billions bribing (lobbying) congress and state legislatures for special privileges, special tax breaks and protectionism.  If we give them a tax free paradise from which to operate, then they get no special privileges and would be subjected to the rigors of the free market and competition, something many corporations abhor. We have to get the corporate money out of politics and kill the scourge of corporatism.  The marriage of big business and big government is simply evil.

However, we can't stop at just abolishing corporate taxes, all the corporate welfare and subsidies must also cease and desist including worker entitlements. food stamps, Medicaid etc.   Businesses must be forced to compete for labor without the drug of entitlements (corporate welfare).

Finally, making America Great Again is a splendid idea but also a minefield for power seeking politicians whose logo infested suites literally resemble NASCAR drivers.  In America, there is no such thing as bribery, it's all a legal campaign or PAC contribution.

You can't make America Great Again without making the American worker great again.  Every American worker deserves the opportunity to work, earn, save, provide for his family and all without dependency on the thieving government that keeps him poor.

Let's work to make Labor Day a day to truly honor and be proud of.  Making America Great Again and Labor Day go hand in hand.  You can't have one without the other.