French Terror Attacks by Islamists and Muslims - the Short List 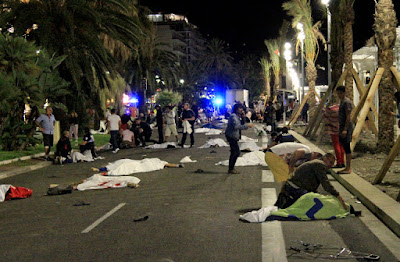 Even a tolerant and peaceful people eventually are fed up with immigrant invaders who murder in the name of their deity.  In France, Muslim terrorism and violence has reached a horrifying level and folks are indeed justifiably terrified of these savages. Ultimately, there is only one choice - fight back or capitulate to Islam.  Fighting back should include the immediate closing of radical mosques, mass deportations of known Islamists and denying them welfare benefits.  Muslim terrorists laugh at us because living off the dole in a western nation is so damn easy.

Furthermore, Muslim terrorism is literally churning western nations into militarized police states. Western nations can't even remember what it is like to roam freely in their nations without the presence of the military.  This is a totally insane way to live.  The solution is easy - get rid of the damn Muslims.

Here's a very short and abbreviated list of what the French have endured because of its open border immigration policies that promoted mass Muslim immigration.

March 2012 Shooting 7 dead, 5 injured.  Toulouse and Montauban shootings, murders of three French paratroopers, and a French Rabbi and three French schoolchildren (aged eight, six and three), carried out over a period of 11 days by Mohammed Merah.

January 2015 Shooting 17 dead, 22 injured   Île-de-France attacks, a mass shooting at the satirical magazine Charlie Hebdo office in Paris, carried out by Saïd and Chérif Kouachi, two Islamist gunmen who identified themselves as belonging to Al-Qaeda in Yemen.[1] During this period, a third Islamist gunman and close friend of the Kouachi brothers, Amedy Coulibaly was responsible for two shootings and an hostage taking at a Hypercacher kosher market. He said he synchronized his attacks with the Kouachi brothers. Coulibaly had pledged allegiance to the Islamic State of Iraq and the Levant.

April 2015 Shooting 1 dead  Unsuccessful attack against 2 churches in Villejuif by an Algerian jihadist. He killed a woman probably when trying to steal her car but accidentally shot himself in the leg, putting an end to his plans.

June 2015 Beheading 1 dead, 2 injured Saint-Quentin-Fallavier attack. An Islamist delivery driver probably linked to ISIS decapitated a man and rammed a company van into gas cylinders at the Air Products gas factory in an attempt to blow up the building.

November 2015 Shootings, hostage taking and suicide bombings 130 dead, 368 injured  November 2015 Paris attacks. The single deadliest terrorist attack in French history. Multiple shooting and grenade attacks occurred on a Friday night; among the locations targeted were a music venue, sports stadium and several bar and restaurant terraces. 90 persons were killed during a siege at an Eagles of Death Metal concert inside the Bataclan. French president François Hollande evacuated from a football match between France and Germany at the Stade de France, venue for the UEFA Euro 2016 Final, after three separate suicide bombings over the course of about 40 minutes. ISIS claimed responsibility for the attacks and President Hollande named the Paris attacks an "'act of war'".

June 2016 Stabbing 2 dead  Magnanville stabbing, a police officer and his wife, a police secretary, were stabbed to death in their home in Magnanville by a jihadist. ISIS claimed responsibility.

July 2016 Vehicle ramming 86 dead, 434 injured A 19 tonne cargo truck was deliberately driven into crowds celebrating Bastille Day on the Promenade des Anglais in Nice. The driver was Mohamed Lahouaiej-Bouhlel, a Tunisian resident of France. The attack ended following an exchange of gunfire, during which Lahouaiej-Bouhlel was shot and killed by police.

Many more Muslim attacks have occurred but fortunately the victims survived or the Muslim was unsuccessful.

It's not just attacks on French citizens that is a huge problem, Muslims in France are notorious for setting fires to cars, buses and other vehicles.  It's just another form of terror. 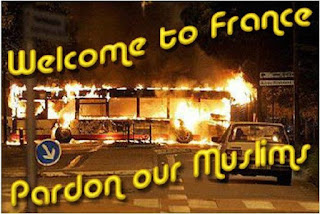