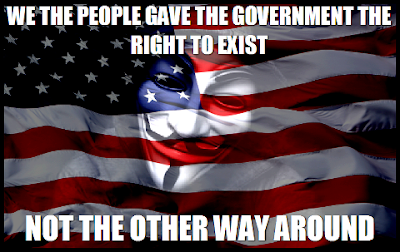 To say that America is a political mess would be a gross understatement.  We are a bankrupt evil empire that is well on the road to becoming just another impoverished and bankrupt banana boat republic.  Spending and debt are out of control.  America's problems are the direct result the concentration of power and wealth in Washington, DC (District of Crime).  It's a place where those elected by We the People are corrupt to the core and where big money, lobbyists, the military industrial complex, corporatists, fascists, special interests and banksters rule.  In truth, elections in America are a fraud perpetrated upon We the People because our votes are meaningless in that they consistently fail to ever change a damn thing.  I seek to explore reasons why the system is so corrupt and how to transform it by making it more accountable and transparent.

If America is to avoid a fate that will destroy us, we must CHANGE.  In fact we need catastrophic changes to change how government operates and we need a defined plan on what must happen.  These are just a few suggestions to jump start a political reformation.

1.  FIRE CONGRESS  Most are corrupt and maybe a handful are worth keeping (Rand Paul, Justin Amash, Thomas Massey, Tulsi Gabbard and maybe a few others).  Just firing congress en mass would constitute an extraordinary display of We the People power telling those rat bastards that We the People are in charge.  YOU'RE FIRED sends a huge message bomb to the pompous and arrogant.

2. GET BIG DIRTY SPECIAL INTEREST MONEY OUT OF ELECTIONS We the People are screwed because the elites who control the RNC and DNC machines also control all the big political money.  Precisely because the rich elites control the political money, they also buy control of government.  That nullifies We the People democracy and makes elections a total sham.  Furthermore I endorse outlawing all PAC's as well as the ability of the RNC, DNC and state parties to raise money.  All political money must be raised by the candidate only and must come from INDIVIDUALS.  Moreover, all political contributions must be reported in real time on the candidates website for the voters to view.  Under the current maze of campaign finance laws, there is no transparency and it's difficult for voters to find out who is funding candidates.

It's totally insane for the rich and powerful to control our elections and government.  That makes We the people their slaves.

3. SELECT COMMITTEE CHAIRS BY LOTTERY & LIMIT TENURE  Nowhere is it written in the Constitution that committees will be chaired by long term establishment R's and D's, typically the geezer brigade with significant congressional longevity, but that's how it works and the system is rigged against the younger with ideas of reform . Longterm tenure on committee results in cronyism and corruption.  Many newly elected Congress Critters are quickly disallusioned when they get to DC and learn how the system really operates; they are literally powerless.

Selecting Committee chairs by a lottery and limiting tenure to 2 years would go a long way toward equalizing the power of every member of Congress and limit the corruption of longevity which perpetuates collusion and cronyism.  Moreover, giving Congress Critters a much broader legislative experience will enhance their knowledge on many various issues.  Finally, it would also make it harder for special interests and lobbyists to buy them.

4. TERM LIMITS Term limits are an important issue that should be considered.  Our founders envisioned a citizen legislative body and not a permanent political class that sells itself to the highest special interest bidder.  Also, the longer they stay, the more expensive they become as they accrue lifetime taxpayer funded pensions and healthcare benefits.  Of course we can debate what those limits should be but I'm thinking 12 years max - 2 terms for senators and 6 terms for representatives.

5. THE CALENDARS OF ALL CONGRESS CRITTERS AND EVEN DEPARTMENT HEADS MUST BE PUT ON THE INTERNET AND MADE AVAILABLE TO VOTERS.  Few voters even understand that elected officials and department heads spend a ton of time with special interests, lobbyists, banksters etc.  We have an absolute right to know what they are doing and with whom.  This is the definition of TRANSPARENCY.  Right now there is a total lack of transparency.   A voter is unlikely to get an audience with his Congress Critter but some special interest with a fat check is always welcome.  This needs to STOP!

6.  ABOLISH THE VOICE VOTE Congress Critters hate recorded votes and love voice votes because it abolishes transparency and accountability.  Citizens have a right to know how they vote and legislators should NOT be allowed to run and hide behind a voice vote.  Make them take a stand on an issue by forcing them to vote.

THE ABOVE ARE STRUCTURAL REFORMS THAT HOLD THE POTENTIAL TO VASTLY IMPROVE the ACCOUNTABILITY AND TRANSPARENCY OF CONGRESS.  If anything, politicians have nothing but fear and dread when it comes to accountability and transparency.  For this reason, they don't want any of the above changes. This is precisely why We the People need to just fire them and and replace them with folks who will promise to implement such changes.  We also need to restore We the People to the primary process.

If primaries are supposed to be a We the People initiative to nominate candidates then why do the RNC and DNC control the process with an anti We the People system of delegates and super delegates?  This of course leads me to the next step.

7. ABOLISH THE RNC AND DNC SYSTEM OF DELEGATES AND SUPER DELEGATES.  It's totally whacked out insane crazy that the same politicians in the existing corrupt system also hold the absolute power to nominate candidates.  This is a royal bitch slap to We the People.  The only delegates at RNC and DNC conventions should be We the People selected delegates and certainly not corrupt party hacks, politicians and congress critters.

8.  WE THE PEOPLE NEED AN ORGANIZATION TO RAISE CANDIDATES WHO WILL COMMIT TO THE ABOVE REFORMS.   Whether you are a Republican, Democrat, liberal, Libertarian, conservative or independent voter, I can't see where any of the aforementioned reforms would be offensive to anybody.  Voters and activists on the left and right are always complaining about how We the People are always getting stiffed in a system stacked against us by big money and corporate interests.

If we can get some much needed sunlight injected into the political system, namely accountability and transparency, then We the People will have an opportunity to work on other issues like:

9. GET FEDZILLA OUT OF THE MARIJUANA ISSUE & ABOLISH ALL FEDERAL MARIJUANA LAWS AND REGULATIONS.   Way too many folks are rotting in prison for pot arrests and the issue should be a state issue and not a federal issue.

10. THE CRIMINAL JUSTICE SYSTEM IS A NIGHTMARE AND MUST BE REFORMED WITH A SYSTEM BASED ON NO VICTIM, NO CRIME.  While a lot of folks are rotting in jail for victimless crimes and most of these prosecutions are violations of state laws, a rewrite of federal criminal statues based on NO VICTIM, NO CRIME would go a long way in setting an example for the states where reform is desperately needed.

11. A FEDERAL BALANCED BUDGET AMENDMENT  I doubt that most Americans are even aware that America is a walking default and a bankrupt nation.  They are truly clueless about how horrific the consequences will be if the government doesn't stop its march to financial collapse and ruin.  When it comes to reigning in spending we must start with abolishing corporate welfare and, my favorite, KILLING THE MILITARY INDUSTRIAL COMPLEX.

12.  KILL THE MILITARY INDUSTRIAL COMPLEX  I've saved the best for last. America stands no chance of survival unless the MIC is KILLED and forever banished.  We aren't funding legitimate national defense, we are funding an empire of waste, fraud, militarism gone mad, resource theft for corporations and we are murdering foreigners for defense contractor profits.  There is ZERO moral justification for America's insane neocon foreign policy which has nothing whatsoever to do with national defense.

Well, this is just a highly abbreviated short list on what We the People need to do just to jumpstart reform.  It won't be easy but it's definitely doable because We the People proved one thing in November, 2016.  We have ballot box power and while Trump's victory was a start, he has learned that he doesn't have the power to change much of anything.  Still, defeating a bankster owned, hideously corrupt corporatist establishment candidate like Hillary Clinton  did in fact shock the elites, the Deep State and its smug operatives. Enough is enough said We the People.

Going forward, the most important reform to rollback government power and keep it in check is to figure out a way to restore sound money and abolish the Federal Reserve along with its thieving system to make the rich richer, the poor poorer and wiping out the middle class.  The Fed literally exists to grow government power and to transfer wealth from the poor and middle class to the rich.  Crushing We the People is the goal of the Fed and it's succeeding spectacularly. 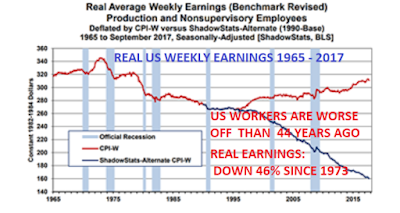 Meanwhile, I absolutely do welcome other thoughts and suggestions on what We the People can do to take back our government from the MIC, banksters, crony capitalists, socialists, Deep State and other operatives who have nothing but contempt for We the People.