#Haiti the Swindled #Shithole of Bill Clinton, Hillary Clinton and the Clinton Foundation 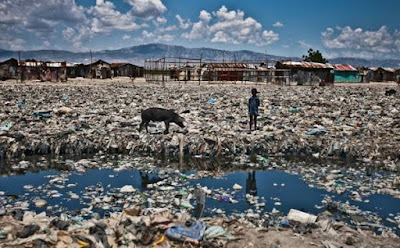 The above photo of Haiti is from a Jan. 2018 article titled Port-Au-Prince, Haiti: A City of Millions but Still Without a Sewer System.  The article discloses:

Port-au-Prince is about the size of Chicago. But it doesn’t have a sewer system. It’s one of the largest cities in the world without one. That’s a big problem, but never more so than during a time of cholera.....

The cumulative sewage of 3 million people flows through open ditches. It mixes with ubiquitous piles of garbage. Each night, an all-but-invisible army of workers called bayakou descend into man-sized holes with buckets to remove human waste from septic pits and latrines, then dump it into the canals that cut through the city.


That is a truly disgusting and deadly way for human beings to live because such filth breeds disease.

Haiti was devastated by an earthquake in 2010 that took 230,000 lives, demolished over 100,000 homes (shacks) and further impoverished an already grotesquely impoverished nation and people.  The international community raised nearly $15 billion to rebuild Haiti; CBS summarized the money raised and how much was needed to rebuilt Haiti.  Economist and experts estimated that $8 to $14 billion was needed so Haiti isn't a disaster today for lack of money.

CBS News set out to answer what seemed like a simple question: how much has been spent on and promised to Haiti?

The answer didn't exist in one place.

So we compiled the best figures available to come up with a total.

Here's what we came up with:

$8.75 billion (for redevelopment from non-U.S. countries and world bodies)

Haiti's government has estimated losses from the quake to be approximately $8 billion. Economists and world bodies have estimated the cost of rebuilding at between $8 billion and $14 billion.

The $14.9 billion donated so far works out to nearly $10,000 for each of the estimated 1.5 million Haitians left homeless and displaced by the disaster. On average, workers there earn just $4 a day.

Much has been written about Haiti and what is widely perceived as massive reconstruction fraud involving Bill Clinton, Hillary Clinton and the Clinton Foundation.  Bill Clinton managed to get himself appointed as the UN Representative for Aid to Haiti.  Putting a Clinton in charge of MONEY is never a good idea considering that they are proven thieves and shakedown artists of the worst sort and it doesn't get any worse or immoral than enriching yourself and your pals from a debilitating and massive human tragedy.  The UN is also notoriously corrupt.

To further complicate what appears to be graft and corruption, much of it was facilitated by Hillary Clinton who as Secretary of State controlled a lot of money (billions) earmarked for Haiti as well as who got the money and lucrative contracts.  Haiti didn't end up with much and despite nearly $15 billion being spent (on what nobody is really even sure), large percentages of that money appear to have been doled out to Clinton pals and Haiti remains a diseased cesspool without even a sewer system.  Yeah, it's what President Trump would call a shithole because, well, it is and not because there wasn't sufficient money to vastly improve Haiti.  However, the money got pissed away as political and Clinton Foundation favors.

Many journalist on the left have severely criticized the Clintons for their role in the Haiti mess.  Shadowproof, a liberal website, wrote in an article titled FOIA RECORDS REVEAL CLUES ABOUT CLINTON CORRUPTION IN HAITI:

Despite over $10 billion in disaster relief, Haiti largely remains just as worst off as it did before the earthquake. Part of the reason appears to be that funds that were supposed to be used to develop the country were siphoned off by corrupt political and business elites. Many of those elites are connected to Bill and Hillary Clinton, who have had a long and substantial impact on the country.

The FOIA documents reveal that a senior aide to then-Secretary of State Hillary Clinton “gave special attention to those identified by the abbreviations “FOB” (friends of Bill Clinton) or “WJC VIPs” (William Jefferson Clinton VIPs).


Friends of Bill indeed!  While the Shadowproof article expands on some of Bill's friends, an article by the National Review significantly exposes even more shady transactions and corrupt schemes by Bill, Hill and the Clinton Foundation.  Because there are so many of them, I posted the National Review article on a separate blog post and highlighted the worst of the reported corruption. That post is an integral component of this blog post so its worth a click.

The real tragedy is that Haitian relief amounted to $10,000 for each Hatian in a country where the average wage is $4 a day.  It would have been far more productive and moral just to give each Hatian $10,000.  They could have rebuilt their homes, start businesses and work together to build a better life.  Instead the money was siphoned off and landed in the pockets of the friends of Bill and Hill.

Back in 2013, I blogged about Haiti, its poverty and how the lack of secure property rights keeps poor countries poor and corrupt.  However, the actual history of Haiti is also worth knowing because you can't understand the tragedy that is Haiti without understand its tragic history.

At the very least, the shadowy sleaze and theft of what really happened in Haiti should be investigated because it's an issue of corruption, specifically billions in US tax payer dollars being diverted to political friends and associates.  However, relief agencies are also profit centers who flock to disaster zones to make money.  It's never about helping the victims. A lot of Haitian relief money was pissed away on luxury housing, cars and disaster area pay (relief workers frequently earned double their salaries when deployed to disaster areas).  The relief and aid business is also pretty damn corrupt.  These folks aren't Mother Theresas! They seek creature comforts, great food and fat paychecks.

Finally, what did the Haitians actually end up with?  Just some luxury hotels and an industrial park that was paid for with US taxdollars but is now vacant (that story is documented in the National Review article). Meanwhile, the Haitians themselves are scooping up shit and raw sewage that is being dumped in lakes rivers which of course is an environmental disaster with severe health consequences

If you want to take about a shithole, the first thing that should enter your mind is Bill and Hillary Clinton.  They and their pals made a ton of money off of Haiti.

Until there is an investigation and audit of the $15 billion, there can be no justice for the Hatians.  It takes a dark and sordid soul to look at this depth of human suffering and feel nothing or see nothing but dollar signs.  Rich folks robbing desperately poor folks like this is as low as it gets. 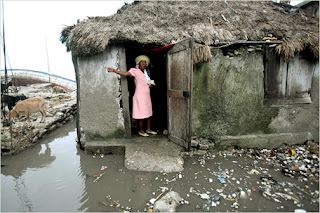