Obamacare - the Legacy of the 1945 McCarran-Ferguson Act, & Understanding How We Arrived at Obamacare

Nancy Pelosi is a dangerous psychopath who endorses endless wars, America's Nazified Police State, the wholesale shredding of constitutional civil liberties and the government takeover of everything.  But she actually got something right during the Obamacare debate when she proclaimed that the insurance companies were villains, even if for all the wrong reasons.  Pelosi wanted to fully utilize the powers of the Federal government to nationalize America's healthcare system.  Instead, Pelosi and the Dems got the horror known as Obamacare.

Healthcare spending in the US hit $2.6 trillion in 2010 according to the Kaiser Foundation, here, and is estimated to explode to $3.4 trillion by 2015 under Obamacare, here. 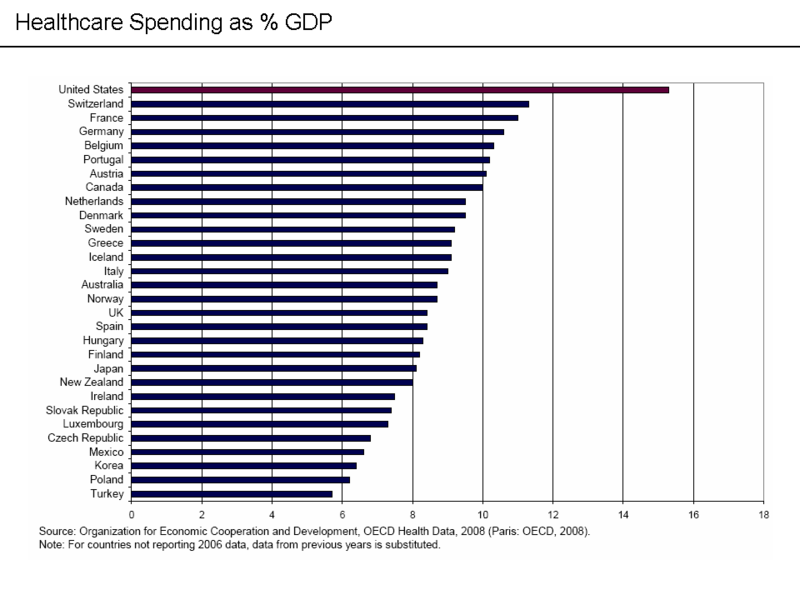 On a per person expenditure basis, US healthcare spending soars ahead of other industrialized nations and we in fact spend more than twice the average of other developed countries. McCarran-Ferguson birthed the mandate and the mandate was very profitable for health insurance companies who had guaranteed profits that were forcibly extracted from consumers.

The mandates varied from state to state but since most health insurance at the time was paid for by employers, few folks noticed that a nasty and destructive cartel was in the making. The nearly $3 trillion and growing healthcare industry became hugely profitable for healthcare monopolies.

Not only did the 1945 McCarran-Ferguson Act unleash a medical cartel and the medical insurance industry takeover of US healthcare, it also spawned the rise of Medicare and Medicaid, well known fraud factories.  Big Pharm quickly jumped in to claim its share of government subsidies and health insurance mandates, a situation that simultaneously birth 'America - One Nation Under Big Pharm'.

Republicans never really opposed Obamacare.  In fact the foundation of Obamacare was hatched by the Republicans and the Heritage Foundation, a conservative think tank.

Something for Conservatives to Think About: Obamacare Really Was a Republican Initiative

A think tank founded by GOP presidential candidate Newt Gingrich collected at least $37 million over the past eight years from major health-care companies and industry groups, offering special access to the former House speaker and other perks, according to records and interviews.

The Center for Health Transformation, which opened in 2003, brought in dues of as much as $200,000 per year from insurers and other health-care firms, offering some of them “access to Newt Gingrich” and “direct Newt interaction,” according to promotional materials. The biggest funders, including firms such as AstraZeneca, Blue Cross Blue Shield and Novo Nordisk, were also eligible to receive discounts on “products and workshops” from other Gingrich groups.

The health center advocated, among other things, requiring that “anyone who earns more than $50,000 a year must purchase health insurance or post a bond,” a type of insurance mandate that has since become anathema to conservatives.

Neither the Republicans or Democrats are willing to touch the issue of mandates because, well, it's a sacred cow and how they get campaign money (bribes) from the health insurance and the healthcare industries.


By virtue of the McCarran-Ferguson Act, passed by Congress in 1945, the insurance industry is one of only a handful of select industries in the United States, such as Major League Baseball and railroads, to be exempted from federal antitrust laws. Schumer, a co-sponsor of a bill authored by Senate Judiciary Chairman Patrick Leahy (D-VT) to repeal the exemption, said the health insurance industry should lose its special status as part of the landmark health care bill scheduled to reach President Obama’s desk later this year.

Schumer was right about the need to repeal McCarran-Ferguson but for all the wrong reasons.  While Schumer accurately accuses the health insurance industry of driving up premiums, Schumer totally fails to address the mandates that are the defining characteristics of both Obamacare and  McCarran-Ferguson.  If anything, Obamacare is McCarran-Ferguson on steroids.

However, there was indeed a HUGE problem.  The health insurance villains were acutely aware that federalizing the mandates would significantly drive up the cost of health insurance everywhere.  So they and their Democrat congressional pals constructed a healthcare system that was a complicated maze of subsidies to pay for the mandates; working families earning nearly $100,000 a year were eligible for Obamacare subsidies.  The political class never saw a subsidy it didn't like so long as their campaign coffers were filled and consumers love the idea of getting something for nothing.

But freebies are never really free as Americans are about to learn.

Actually, health insurance exchanges are a good idea providing they are free market exchanges without costly mandates and subsidies.  Neither the government nor the healthcare industry will allow for consumer choice.

But heck, it's America where everybody from old men demanding cost free Viagra and hair transplants to the Sandra Flukes of the world demanding cost free birth control enjoy forcing other people to pay for their acute sense of entitlements including a sex life and vanity.

At the end of the day, it's always about villains and vanity and America has no shortage of either.