Donald Trump: The Good, the Bad and the Ugly 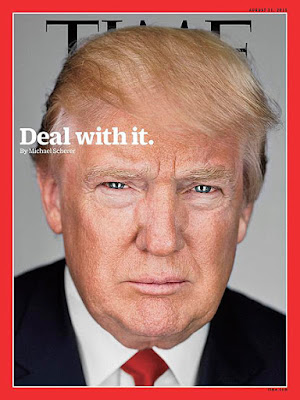 For the record, I Stand With Rand and will vote for him in the primary.  However, on some level I'm not the least bit perplexed by the meteoric rise of Donald Trump. The fact that a boisterous and even arrogant billionaire is romancing and captivating the hearts and minds ordinary working stiffs who are far removed from his glamorous world of power and privilege may be difficult to fathom but Trump and his 'in your face' style is making it happen.

Michael Scheuer, a foreign policy advisor to the Ron Paul campaign and a former CIA intelligence officer who penned the piece for Time Magazine in the above photo cover, wrote "If you want to understand what is happening in the country right now, to get at its shifting id, its calcifying frustrations, its guttural demand for change,...you need only listen to that message of disgust, for the political system, its falsehoods and failures, which has taken Trump to the top of the Republican polls."

Tucker Carlson, a libertarian leaning conservative bluntly blamed the Republican Party and its elites for the rise of Trump in a scathing piece titled Donald Trump Is Shocking, Vulgar and RightAnd, my dear fellow Republicans, he's all your fault.

He Exists Because You Failed....

Conservative voters are being scolded for supporting a candidate they consider conservative because it would be bad for conservatism? And by the way, the people doing the scolding? They’re the ones who’ve been advocating for open borders, and nation-building in countries whose populations hate us, and trade deals that eliminated jobs while enriching their donors, all while implicitly mocking the base for its worries about abortion and gay marriage and the pace of demographic change. Now they’re telling their voters to shut up and obey, and if they don’t, they’re liberal. It turns out the GOP wasn’t simply out of touch with its voters; the party had no idea who its voters were or what they believed. For decades, party leaders and intellectuals imagined that most Republicans were broadly libertarian on economics and basically neoconservative on foreign policy. That may sound absurd now, after Trump has attacked nearly the entire Republican catechism (he savaged the Iraq War and hedge fund managers in the same debate) and been greatly rewarded for it, but that was the assumption the GOP brain trust operated under....

If you live in an affluent ZIP code, it’s hard to see a downside to mass low-wage immigration. Your kids don’t go to public school. You don’t take the bus or use the emergency room for health care. No immigrant is competing for your job. (The day Hondurans start getting hired as green energy lobbyists is the day my neighbors become nativists.) Plus, you get cheap servants, and get to feel welcoming and virtuous while paying them less per hour than your kids make at a summer job on Nantucket.

Trump is not a neocon; in fact the neocons hate his guts.  He's on record opposing the Iraq War and way back when Bush started the damn war.  Trump opposed the Iraq War when it was popular and long before the horrors of Abu Ghraib emerged.  The US government was running a brutal torture operation in Iraq.

Not only is Trump on record opposing the Iraq War, during a GOP debate he blasted the Iraq War, its cost and the horrid damage to the Middle East:

We have done a tremendous disservice not only to the Middle East — we've done a tremendous disservice to humanity. The people that have been killed, the people that have been wiped away — and for what? It's not like we had victory. It's a mess. The Middle East is totally destabilized, a total and complete mess. I wish we had the 4 trillion dollars or 5 trillion dollars. I wish it were spent right here in the United States on schools, hospitals, roads, airports, and everything else that are all falling apart!"


For a Republican candidate to make such an anti-war statement during a Republican primary debate is no less than astounding but what is even more astounding is that his remark didn't hurt him in the least and he continued to rise in the polls despite the consternation of the neocons.  I remember when Ron Paul got dissed in a South Carolina debate for suggesting that America follow the Golden Rule on foreign policy.  He got booed.  But the times they are a changing!  Even Republican voters seem to have finally lost their appetite for never ending wars.  Trump doesn't suffer in the polls when he attacks US foreign policy and on GOP sacred turf no less.

Trump has been vocal on other issues.

TPP and Trade Agreements America's nasty job destroying trade agreements that began with NAFTA and are now ballooning have decimated US manufacturing and those good paying middle class jobs. Trump is on record vociferously opposing these trade deals.  Trump said "I am all for free trade, but it's got to be fair" and the "TPP is a horrible deal; no one has read its 5,600 pages".  For more on Trump and the trade agreements, see Donald Trump on Free Trade.

Immigration: Trump has raised the issue of immigration.  America keeps getting flooded with low wage immigrants and many of them are taking jobs from Americans who are actually getting fired and replaced with cheap labor.  Moreover, many of those comprising the 'cheap labor' are in fact so impoverished by low wages that they are entitlement dependent.  I blogged about the immigration issue in depth - Let's Talk IMMIGRATION.

Vaccines I personally oppose forced vaccinations and do share Trump's concerns over their safety. Trump has stated that vaccines cause Autism, here, and there is ample evidence to support his assertion. Trump obviously isn't owned by Big Pharm who peddles poison.

GMO It's not clear where Trump stands on the issue of Monsanto, GMO and food labeling but he tweeted back in October a statement that fired up the food labeling, anti-GMO and anti-Monsanto folks with  "#BenCarson is now leading in #polls in #Iowa.  Too much #Monsanto in the #corn creates issues in the brain?".  The tweet was perceived as so outrageous and insulting to Iowans that Trump withdrew it and blamed it on an intern.  Since that tweet,  Trump has opted to avoid the issue, something he does on issues that can backfire and hurt him.

Populism Trump has the uncanny ability to market himself on a platform of a rising populism as if he's screaming to the folks "Hell yeah, I'm one of you and I'm on your side".  In fact, it's fair to say that Trump has definitely brought populism back into politics after a long absence.  Voters are so damn angry at their party elites that their political masters within the RNC and DNC machines are rapidly losing power, control and influence.  That's a good thing.

Nobody can really predict what Trump will or will not do. He's kind of a seat of the pants autocratic entrepreneur with a big ego and he relies on his gut instincts.  That personality trait is excellent when it comes to attacking his POTUS competition and dissing the GOP establishment but it really doesn't offer much in the way of what Trump would actually do if elected president.  However, America, it's economy and all its moving parts are hugely complex as well as deeply entrenched within systematic corruption and cronyism.

What is clearly evident is that folks are flocking to Trump because he isn't a traditional politician, he's never held elected office, he shoots from the hip and he's basically campaigning on "Trust me, I will make America great again".  That's quite a promise!

Trump sucks on civil liberties and clearly endorses Police State USA, the NSA, the National Security State and obscene 4th amendment shredding surveillance.  Unlike Rand Paul who considers civil liberties one of the core issues of his campaign, Trump just trumps civil liberties as an issue by ignoring it.

It's highly unlikely that there will be smaller government or less government spending under Trump.  He's promised a single payer healthcare system (no details) and he's also promised more defense spending and appears to want to build the military industrial complex into a bigger nightmare that it already is because Trump claims that a big bad military will keep the bad guys away through the power of intimidation.

BOTTOM LINE: Voting for Trump carries risk.  However, voting for the 'same old, same old' creeps who are proven to be wholly owned subsidiaries of corporatists, fascists, defense contractors and banksters, corporate welfare queens etc. is an even bigger risk because America's ship is sinking FAST, America's middle class is vanishing and the poor are getting poorer while the rich are getting richer. Obama was supposed to be the Man of Change in 2008 but he turned out to be a big fail.

It's not likely that Trump will perform miracles but it's entirely possible that Trump would work to end the wars, reign in the neocons, change foreign policy, nullify job destroying trade agreements, restore US manufacturing and improve the economy for the working class. That's a risk many believe is worth taking at the ballot box because if voters fail to act to change course, America's deterioration will only accelerate.

A McClatchy article summarized the mood of the American people in a piece titled America 2016: We’re mad as hell and not going to take it anymore

MARSHALLTOWN, IOWA Craig Ziemke has voted for Democrats all his life, including twice for President Barack Obama. Not this year.

“The whole country is going to hell,” the 66-year-old retired factory worker said, standing against the bleachers at a high school gymnasium while waiting for Republican presidential candidate Donald Trump to arrive. Ziemke’s fury is deep: Roads and bridges in the U.S. are falling apart, jobs are scarce and the U.S. border is wide open, he says.

“We’re letting all these people into the country. No one even knows who the hell they are,” he said. “We don’t need any more Arabs. The United States, anymore, is just a dumping ground for everyone.”

Ziemke plans to caucus for a Republican on Monday – and likely for Trump, “the only one with brains,” he said.....

In interviews with dozens of voters in both parties, the driving motivation across the state is anger and uprising. They’re fed up with lawmakers in Washington, who seem to work two or three days a week and get little done aside from raising money to stay in office. They’re mad about stagnant wages, companies sending jobs overseas and terrorists sneaking in across the border.

And there you have it - the voice of the people and how they intend to use the power of their vote to effect change.  It's 2008 all over again except that the new man of HOPE and CHANGE is now Donald Trump.  Call it a wing and a prayer vote that Trump won't turn out to be another Obama or Bush.  I understand the desperation of the poor and middle class - they've been royally shafted by a system criminally stacked against them so firing somebody is all that they've got left.

Folks are taking their cues from Trump himself when it comes to the Republican and Democrat party elites.