Although the Republican controlled House of Representatives recently passed Audit the Fed, HR 459, Audit the Fed will never pass nor will the Fed ever be abolished legislatively. Republicans really do support the Federal Reserve because it funds their wars and empire. Furthermore, all the Republican YEA's to Audit the Fed were nothing more than an act of political expediency because Republicans in Congress absolutely do understand that Audit the Fed stands no chance of ever getting out of the Senate where it only has 30 co-sponsors and could never survive a presidential veto.

The Federal Reserve is the mother's milk of empire, tyranny and statism.  Big government and central banks exist for no purpose except to massive concentrate wealth and power.  Moreover, it's absolutely true that the phrase "99% vs the 1%" is indeed a valid premise even if it was hatched by socialists on the left.  What the progressive left fails to grasp is that it was liberal progressive Democrats who delivered unto us the Federal Reserve that was empowered to transfer wealth from the 99% to the 1%.

In many way, the progressive left considers itself intellectually superior to liberty because, control freaks that they are, they believe that there isn't anything they can't control or shouldn't control, given their totalitarian mindsets. . Hence, they have an enormous propensity to align themselves with big corporatist and big bankster money, the very same folks they claim to abhor as the blood suckers of humanity.  It's a situation of where progressive police state ideology butts heads with the real power - the power of big statist money.  In the end, it's always about power and never liberty or even the the prosperity of the people.   The first victims of most Marxists revolutions are typically the bourgeois, the middle class, and the backbone of any flourishing and prosperous society.  Marxist revolutions are never about revolts against capitalism but always about joining with the powerful to share totalitarian power.

Communist party officials always had the finest homes and the finest foods. They always exempted themselves from breadlines as the hoards of lowly humanity, the proletariat they claim to love, waited in line for hours to buy a loaf of moldy and stale bread.  The commie officials always had the best of everything from caviar to imported French wines.  From Stalinists and Marxists to the limousine liberals of the west, these folks thoroughly enjoy their rockstar status, power and money. 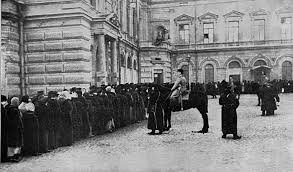 With minor exceptions, nearly all western nations are indebted on a scale that is unsustainable.  Individual citizens are also massively indebted and will default on their debts.  The fiat banksters will suffer loan losses that will wipe out their capital.  It started in 2008 and while the Federal Reserve intervened and pumped some $16 trillion into the financial system, here, it was the equivalent of putting a band aid on a massive and oozing cancerous tumor for the sole purpose of hiding the tumor but not its deadly effects.

How will this mess shakeout?  It will shakeout the same way it's shaking our in Greece and Spain, namely, folks will devise new paradigms of survival that will include barter and underground economies. More importantly, they will just opt out of the system to the extent that they can to escape the government tax collectors.  Folks will seek financial safety in hard currency and they will withdraw their money from the banks.

As The Euro Tumbles, Spaniards Look To Gold

The euro exodus from Greece and Spain

Wary depositors are hauling billions of euros our of Greek and Spanish banks, reflecting the nervous mood of the people.

More than any election result, bank runs reflect the mood of the people.

Folks fear 2 things. They fear a currency collapse (devaluation and  hyper-inflation), something that is always triggered by the massive printing of currency. But they also fear the government seizure of what money they do have.

One of the benefits of modern technology and the computer age, at least from the perspective of the government, is that governments now have the ability to track your entire life - from auto-deposit payroll checks to what goes in your savings account and to what you buy with debit/cards. Government know where your money is all times because they have an electronic trail and road map. But the government's power to track, tax and plunder becomes a whole lot more limited in an underground economy that may utilize various methods to transact business, including cash, plain old bartering, local currency or even a cyber currency like Bitcoin.

Moreover, hard currency like gold and silver will also come into play as a newly emerging default currency. The modern system of government taxation and banking requires trust in the system but when trust and confidence evaporates on a significant scale, folks will always flee to safe havens that protect wealth from devaluation and confiscation. At this point, government revenue collection machines and fiat banks are in deep trouble. Government revenues shrink and folks withdraw their money from the banks, something that denies the government the ability to track their life and every financial transaction.

It's wise to use cash to purchase what you need and bills can be paid with money orders. Even folks with auto-deposit paychecks are withdrawing their money from their bank accounts. It's very important to conduct one's financial life, to the extent that one can, beyond the snooping electronic eyes of the government and its agent-in-chief, the banks. Even more importantly, it's imperative to keep a low profile and live below the governments radar - never attract attention or discuss your business with anybody.

In many ways, the government and its fiat banks have sown the seeds of their own destruction by spending way too much money, taxing folks to the point of outright expropriation and doing it all with fiat money.  In the process, government and banksters have literally destroyed the one thing that sustained them - the wealth producing capabilities of a thriving economy.

Most folks never wanted to opt out of the system. They were forced out by government policies that destroyed their jobs, livelihoods and their prosperity. In fact, most folks were quite content and very willing to tolerate the corrupt system so long as as the system was working for them. But whether one is in Greece (where an estimated 30-50% of all economic activity is now underground), Spain or the US, the system is no longer working for the growing millions who got shafted and are now suffering.

To be sure, these folks will seek vengeance on the government that caused them so much misery and their willingness to ever trust the government and its banksters again will be about zilch. A paradigm shift from 'government is great and government is god' to 'screw the corrupt government' will unfold slowly but it will ultimately be massive. Furthermore, the beast known as the government monster will be starved in the process as revenues dry up.

Starving the beast is a two-step dance that includes opting out of the banking system and figuring out how to make and trade your stuff and skills through voluntary associations. Granted, it's a challenge but many folks are embracing the challenge as they dive headfirst into survivalist mode. Going forward, there will be a proliferation of small rural voluntary communities with good soil and a reliable water source. Skills will become critical (carpenter, plumber, mechanic and other trades) but the services of doctors and geeks will also be in demand. Hot commodities will be basic food, fuel and medicine.

Many Americans have already embarked on a journey that they never anticipated but was forced upon them without their consent.

Benefits of the 1099 Economy, the Underground Economy and the Future of Freedom

According to Forbes, the 1099 economy is booming.

One of the biggest obstacles facing government is its ability to collect taxes. So long as folks are employed as employees, the government easily got its share of plunder right off the top via the federal withholding tax and the Social Security tax, along with other taxes including state taxes. Enforcement of tax collections was never really much a problem for government so long as most folks were employees. The government didn't need an army of tax collectors; employers functioned as the primary tax collectors for the government.

But with the economy tanking and necessity being the mother of invention, folks are now forced to discover new paradigms of survival. Many companies are resorting to contract labor to avoid the legacy costs of health insurance and retirement plans. They hire independent contractors and issue a 1099 instead of a W-2. Folks who earn 1099 income are required to file tax returns, they are required to pay quarterly taxes and they are considered self-employed. They are effectively small business owners who also avail themselves of legal tax deductions.

1099 income is a whole lot harder for governments to trace and enforcement becomes a huge problem for the government. Precisely because 1099 tax revenues don't consistently and reliably flow to the government in a timely manner, the government is at a disadvantage because it no longer has employers functioning as efficient and immediate tax collectors.

The economic calamity has also spawned a massive distrust of the government. Folks are simply fed with with paying taxes. When government is perceived a corrupt to the core and no longer offers value to taxpayers, taxpayers will seek ways to just opt out of the system. And thus, the underground economy is born.

There can be no question that America is in uncharted territory but whatever happens will also translate into an opportunity to shed the shackles of slavery, fiat money and corrupt government. The one thing that America needs most - peace, liberty and prosperity - will never flow from the government or government power, which is precisely why the beast must be starved.
Posted by Judy Morris at 8:32 PM