Beppe Grillo, Italian Populism, the Left, the Right and Who is right? 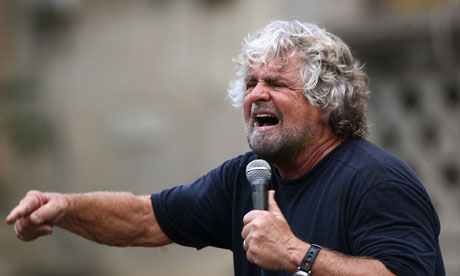 Nothing has quite fired up populist rage around the world like Italian commedian turned politician Beppe Grillo and his Five Star Movement, also known as Movimento 5 Stelle.   It's the equivalent of the "shot fired around the world" because it's gone media viral and, more importantly, directly threatens the cozy corrupt establishment.  Ordinary folks everywhere are cheering for Grillo. In the recent Italian elections, there was no clear winner although Grillo's Five Star Movement elevated itself to the largest political party in Italy.  The candidates included the former Italian prime minister, Berlesconi of the Bunga Bunga fame, who was forced from office amid sex scandals and allegations of wild orgies.  Berlesconi  represents the center right and Italy's deep culture of corruption.  Barsani, the leftist with links to hardcore Marxists, was the choice of statists and communists.  Monti, the engineer of fiscal austerity, is a technocrat who respresents bankster interests, performed the worst in the election with under 10%.

Italian politics really aren't that much difference than politics everywhere because folks really are spitting venomous fire at those they believe are responsible for job losses and economic misery.

Financial and political pundits are literally glued to Italy and Zerohedge.com is no exception.

Italian debt jumped in 2012 to 127 percent of gross domestic product from 120.8 percent a year earlier. As Bloomberg notes, that's the most since 1924, when Mussolini won 64 percent of the popular vote in elections that opposition members said were marked by irregularities. While the only irregularities in the current election were the electorates dismissal of the status quo - as Monti’s policy mix prompted 25 percent of voters to back the anti-austerity stance of comedian-turned-politician Beppe Grillo’s Five Star Movement, which was the single most voted party in the country...

All Roads Lead To Rome


This contest will be decided by the mob; thumbs up or thumbs down. Even if you wish to believe in the far flung view that Bersani could form a new government; it will not survive as Grillo can block what he wants and on his own which makes no mention of Berlusconi who is not exactly Bersani’s ally either in spirit or political leaning. Odds on is that a new election will have to be called and that Grillo gathers even more votes as his political positions do not rest upon being a comedian but upon a new order for Italy. You may recall Ronald Regan in our own country, a former cowboy star and the positive affect that he had on America. Grillo may be the Ronald Regan of Italy and it means the worst of scenarios for Europe as the old guard is thrown out, the deceptors by design, and the people, the mob, has the run of the Coliseum once again.

Grillo refers to Berlusconi as “the psycho dwarf.” Grillo’s vision of Bersani is a “dead man walking.” In an interview that Grillo had with the New York Times over the weekend he said he would support neither side and that doing so “would be like Napoleon making a deal with Wellington.” He went on to say that, “We can change everything in the hands of respectable people, but the existing political class must be expelled immediately.”

What precisely is wrong with Italy?  Italy has the same spending/debt disease that is plaguing the rest of Europe as well as America.  But what is especially angering Italians is that austerity is being forcibly imposed on the people while the rich get bailouts and headlines like this only fuels discontent.

Italy To Bail Out Old, Broke and Crooked Bank


Heard of too big to fail? How about too old, broke and crooked to fail?

The Treasury loaned the money to Monte dei Paschi even though it is seen as basically insolvent by the markets -- the nominal amount of the rescue package exceeds the market capitalization of the bank -- and even though the institution's chairman, Alessandro Profumo, is under criminal indictment, accused of helping devise a tax evasion scheme....

Headlines like the above fire up resentment and anger.  As the people are forced to endure austerity, there is zero austerity for the wealthy and politically connected who clearly exert their political clout to avoid the austerity that is being forced on the working class.  It's a recipe for revolution and class warfare.

Because the dollar is still the world's reserve currency, America kind of gets a temporary stay of execution but the executioner's ax is destined to eventually fall on us.   There is no escape from political corruption, crony capitalism, unsustainable spending and mountains of debt with a limit of infinity.  It's just that some nations will fall faster than other nations.

The left is notorious for solving every problem with 'let's raise taxes and go after the rich'.  The French socialists attempted this by imposing a 75% tax on the rich but the tax was later declared unconstitutional by a French court.  Undeterred, the French socialists are now back with a proposed 66% tax.  Meanwhile, the rich are escaping from France in droves as they fear asset and income confiscation.  The French economy has hit the skids and unemployment is soaring.

What the left gets right:  some on the left are indeed aware that trillions of dollars have bailed out the rich and they acknowledge the injustice of bailing out banksters and the rich.

What the left gets wrong:  The left continues to cling to its insane delusion that if they only had control of all wealth and resources that their perfect communitarian society would become a reality. In fact, it's well documented that socialism/communism snuffed out 100 million lives in the 20th century alone, and mostly by starvation.  Moreover, progressives, Democrats and liberals are indeed responsible for snuffing out nearly 100 million lives in wars that it embraced and eagerly started.  Who got America into WW I, WW II, the Korean War, the Vietnam War and the Balkan Wars?  All progressive, liberal Democrats:  Wilson, Roosevelt, Truman, Lyndon Johnson and Clinton.

What the right gets right:  Nothing really.

What the right gets wrong:  Throughout the world, the right consistently and vigorously defends the status quo, the banksters, central banks, corporatism, crony capitalism, corporate bailouts and in America the Republican right has become the War Party with its overt advocacy of a historically Democrat styled muscular interventionist foreign policy.

While the right claims to defend free markets, limited government and liberty, it's record on all 3 is a big fail.  In fact, the so-called right in America and elsewhere is just as big government statist and warmongering as the left, a situation that keeps liberty activists and advocates for free markets, peace and civil liberties in a state of perpetual war against the Republican right and the Democrat left.

Nobody on the right ever said that the banksters or the rich should be subject to the discipline of free markets and suffer the consequences of stupid investment decisions.  Had it not been for the public bailing investors, bondholders and banks, the rich would have justifiably lost a lot of their wealth.  To elevate risk taking and gambling to the status of a government earned subsidy is the equivalent of bailing folks who gamble risk free at the central bank and Wall Street casinos.

Ultimately the spending, debt and statism will destroy the prosperity and liberty of the people and bring down western civilization because with very minor exceptions like Switzerland, western governments and its voters have indeed embraced the state as the Golden Calf and the cornucopia of plenty.

This will not end well.  In fact, it is guaranteed to end in a big pile of profound human misery, riots, civil unrest and the big thump of government tanks and swat teams crushing the people.

While I salute the Italians and the rise of Beppe Grillo for their courage to raise a truth that needed to be raised, the problem with Grillo is that while he can accurately diagnose the problem and the disease, he falls way short on solutions for the problem and a cure for the disease.  But heck, at least Grillo is halfway there in that he has exposed the massive corruption and political con game of governments bailing out the rich.