Naturally, the common people don't want war ... but after all it is the leaders of a country who determine the policy, and it is always a simple matter to drag the people along, whether it is a democracy, or a fascist dictatorship, or a parliament, or a communist dictatorship. Voice or no voice, the people can always be brought to the bidding of the leaders. That is easy. All you have to do is to tell them they are being attacked, and denounce the pacifists for lack of patriotism and exposing the country to danger. It works the same in every country. Hermann Goering, Nazi Germany

Fox News and its neocon, warmongering, statist and tyranny worshiping lineup of journalists are and have always been the biggest media cheerleaders for endless wars.  The other networks were not too far behind Fox News because all broadcast mainstream media is nothing but a propaganda mouthpiece of the government.  Frankly, the government and the media are indeed partners in horrific crimes and that is the way it's always been.

Fox News recently posted a piece on the cost of the Iraq War.

Too much taxpayer money was spent in Iraq for too few results, report finds


Ten years and $60 billion in American taxpayer funds later, Iraq is still so unstable and broken that even its leaders question whether U.S. efforts to rebuild the war-torn nation were worth the cost......The abysmal Iraq results forecast what could happen in Afghanistan, where U.S. taxpayers have so far spent $90 billion in reconstruction...

Reporting on the cost of the America's war machine is a big NO NO.  The people aren't allowed to know that the economy is a mess because the wars are bankrupting us.  So how much did the Iraq and Afghanistan wars cost us?  According to The Christian Science Monitor, the cost of the Iraq War as of 2011 was $800 billion and expected to reach $4 trillion.


Iraq war, now winding down with US troop exit by December, has cost more than $800 billion so far. But ongoing medical treatment, replacement vehicles, etc., will push costs to $4 trillion or more.

How much did the War in Afghanistan cost?  It isn't exactly clear because war costs tend to be buried and spread throughout multiple agencies and their obscure budgets.  However, USA Today reported in 2010 that the cost of the Afghan War is expected to exceed the cost of the Iraq War.

The Washington Post, a pro-war and pro-interventionist mouthpiece of the elites, even whined that the current Iraq War would cost at least $3 trillion and admitted that the Bush Administration estimated the cost of the Iraq War at $50-60 billion and that was back in 2008.

The Iraq War Will Cost Us $3 Trillion, and Much More

Some people will scoff at that number, but we've done the math. Senior Bush administration aides certainly pooh-poohed worrisome estimates in the run-up to the war. Former White House economic adviser Lawrence Lindsey reckoned that the conflict would cost $100 billion to $200 billion; Defense Secretary Donald H. Rumsfeld later called his estimate "baloney." Administration officials insisted that the costs would be more like $50 billion to $60 billion. In April 2003, Andrew S. Natsios, the thoughtful head of the U.S. Agency for International Development, said on "Nightline" that reconstructing Iraq would cost the American taxpayer just $1.7 billion.

But wait, it gets worse.

If $3 trillion bucks sounds like an insane amount of money, apparently the Washington Post vastly underestimated our war costs. Steve Chapman in a Real Clear Politics piece titled “The Unaffordability of Endless War” said “Scholars Joseph Stiglitz of Columbia and Linda Bilmes of Harvard published a book in 2008 called "The Three Trillion Dollar War," which gives a more realistic estimate. But that, too, is an understatement. They figure that when all long-run costs are factored in, the tab will be at least $5 trillion and could reach $7 trillion, or nearly twice as much as this year's entire federal budget.” Chapman went on to say:


And that was two years ago. I asked Bilmes for an update, and she said some obligations, like veterans' medical and disability compensation costs, "have exceeded our earlier projections." Do I hear $8 trillion?”

The beauty of the current conflicts, however, is that we can pretend we don't have to pay for them. Unlike past wars, when taxes were raised to defray the cost, these have been financed with the help of borrowed funds. But eventually the astronomical bill will have to be paid.”

Yet, every cent spent on the wars, whatever the amount is, was appropriated by Congress.  Congress Critters overwhelmingly approve war spending which is an entirely different animal than legitimate national defense spending.  Things are so bad in America that it would not be wrong to assert that this nation is indeed a wholly owned subsidiary of the military industrial complex and we may in fact be a de facto military dictatorship.

As nations descend into tyranny, it's almost always the result of war and the crushing blow to civil liberties is evident everywhere.

As America morphs into a nasty and ruthlessly brutal Nazified police state, the American people have no one to blame but themselves because they indeed voted for what they got - a busted economy and a militarized police state.

Is this the face of America - massive murder everywhere? 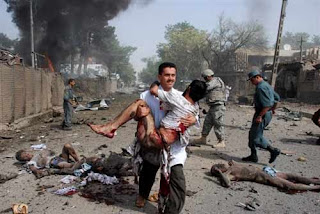 The cost of having no conscious or moral compass is prohibitively expensive.