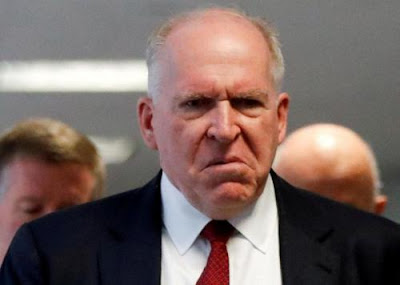 By all accounts John Brennan is one evil dude. The right currently hates him because of his hatred for President Trump, as well as his role in masterminding RussiaGate aka SpyGate aka IntelGate. Brennan was clearly a critical operative who indeed did use his vast powers as CIA Director to pimp for Hillary Clinton with the hope of swinging the 2016 presidential election.

Many on the left, especially those who value civil liberties and are antiwar, also hate Brennan.  Stephen Lendman (StephenLendman.org) is liberal blogger who had some choice words to say about Brennan, in an article titled 'NBC Hires War Criminal John Brennan', here.

He was Obama’s Murder, Inc. administrator, chairing a panel of National Security Council officials, along with others from the CIA, FBI, Pentagon, and State Department, waging US war OF terror at home and abroad, deciding who lives or dies...

He was involved in torture and abuse at Guantanamo and other US torture prisons.

Russiagate is a cooked up Brennan scheme, complicit with Obama and Hillary to delegitimize Trump, trying to prevent his election, aiming to remove him from office once in power, plotting a coup d’etat against a sitting president, the way banana republics operate, rogue state America worse than any around.

Brennan reflects the worst of imperial lawlessness, a war criminal, a Russophobic/Islamophobic rogue actor, involved in cooking up phony accusations of Russian US election meddling, a serial liar, a threat to world peace – splendid credentials for an NBC News talking head contributor.

Lendman is no Trump supporter but he is a ferocious antiwar activist who has nothing but contempt for Hillary Clinton because of her murderous interventions in Libya and Syria.

The piece is so outrageous that it's worth quoting but the full article is:

John Brennan: President Trump’s Claims of No Collusion Are Hogwash

Before I get into quoting the unhinged Brennan and his baseless accusations that include ZERO proof of anything that he alleges, I'd like to comment on the issue of Russian collusion in the 2016 election.  I read a lot of foreign media, including Russian media.  The Russian media didn't seem too interested in the US presidential election and viewed it as a contest between the devil that they do know (Hillary Clinton) and a politically unknown American real estate magnate who had a very entertaining TV reality show.  The Russians never viewed Trump as a serious politician yet alone a competent or experienced diplomat and believed based on poll data that Clinton would easily win.  Accordingly, it's highly unlikely that the Russians would have even invested much of anything into swinging an election that they believed was already a done deal before the votes were cast on election day.

Also, the REAL Russian collusion story is the story of Hillary Clinton bribing the Russians to get approval for the Russian acquisition of Uranium One, a Hillary Clinton deal that literally sold 20% of US uranium to the Russians in exchange for a $145 million contribution to the Clinton Foundation.  I'd also like to add that it's reasonable to conclude that the Russians, or any foreign government for that matter, prefer US officials and presidents who are known to be corrupt and could be easily bribed.  Getting what you want with a bribe is always a hell of a lot easier and cheaper than going to war for it.

Anyway, Brennan's NYT rant against Trump is full of raw and absolute hatred for Russia and Putin.  It's also the act of a desperate man who increasingly is being pinpointed as the front man in the Obama Administration's efforts to get Clinton elected by hook or crook and that it was Brennan himself who was the grand ringleader in the schemes and scams to discredit Trump with lies so egregious that even the creepy Comey called the now infamous Steele dossier 'salacious and unverified'. Brennan lets lose with:

...these Russian operatives and agents are well trained in the art of deception. They troll political, business and cultural waters in search of gullible or unprincipled individuals who become pliant in the hands of their Russian puppet masters. Too often, those puppets are found. In my many conversations with James Comey, the F.B.I. director, in the summer of 2016, we talked about the potential for American citizens, involved in partisan politics or not, to be pawns in Russian hands. We knew that Russian intelligence services would do all they could to achieve their objectives, which the United States intelligence community publicly assessed a few short months later were to undermine public faith in the American democratic process, harm the electability of the Democratic candidate, Hillary Clinton, and show preference for Mr. Trump.


Basically, Brennan is stating that the Russians are so brilliant and manipulative that they have the power to make American voters 'unprincipled individuals who become pliant' and 'pawns in Russian hands'.  He's also implying that the American voters are too stupid to think for themselves.  When Brennan speaks about harming the electability of Clinton, that in itself is worth a roaring LOL.  Clinton did an outstanding job at harming herself by being a lazy and arrogant candidate whose description of Trump voters as DEPLORABLES probably pissed off enough Americans to send them running to Trump.

...in late July 2016, however, when Mr. Trump, then a presidential candidate, publicly called upon Russia to find the missing emails of Mrs. Clinton...

That is hilarious especially considering that the only reason Clinton had a private server in the first place was to secretly circumvent US public disclosure laws and FOIA requests because she was running an illegal play-to-play scam that clearly included shaking down the Russians for $145 million in the Uranium One deal.  As for the missing 30,000 plus emails that were wiped from her server with Bleach Bit AFTER she received a subpoena for that server, it's clear that Clinton was literally destroying evidence which is a felony.  Furthermore, it is widely speculated that the information on Clinton's unsecured server probably was hacked by various foreign entities (wasn't hard to do).  Any amateur geek could do it and that server also contained classified information.

The only questions that remain are whether the collusion that took place constituted criminally liable conspiracy, whether obstruction of justice occurred to cover up any collusion or conspiracy, and how many members of “Trump Incorporated” attempted to defraud the government by laundering and concealing the movement of money into their pockets.

Boom! One of the most deceitful and deplorable characters in US political history is accusing Trump and/or his associates of criminal collusion, conspiracy, obstruction of justice, money laundering and hiding money that somehow ended up in their own pockets!

If anything, what Brennan accuses Trump and his associates of doing is really a very brief synopsis of the crimes of Clinton Incorporated.  Bill and Hillary Clinton have done all of that for decades and they got away with it.

Finally, it's most interesting to note that all the things that Brennan accuses Trump of doing has been under investigation by  Special Counsel Robert Mueller and his pack of rabid Trump hating pit bull prosecutorial team members for 18 months.  They have NOTHING, yet motor mouth Brennan in cahoots with the NYT believe that they can take down a legally elected sitting president with lies, false accusations, innuendo and suggestion?

Want to talk hogwash?  It's Brennan the scared, pathetic, desperate and soon to be outed traitor, provocateur extraordinaire and purveyor of fiction who is spewing hogwash.  His sorry ass doesn't deserve to be saved and it would indeed constitute an egregious and flagrant abuse of the rule of law to allow him to abuse his power and continue to get away with his crimes.

I'll end this post by providing a few more interesting links for those who are truly following this issue:

Is John Brennan The Mastermind Behind Russiagate?

John Brennan, Melting Down and Covering Up...He accuses Trump of treason. But what's his bluster really about?

Russiagate or Intelgate?The publication of the Republican House Committee memo and reports of other documents increasingly suggest not only a “Russiagate” without Russia but also something darker: The “collusion” may not have been in the White House or the Kremlin.