Who Cares About the #NFL, If They Stand or Kneel, I Don't. Conservatives are in a state of absolute horror over kneeling football players.  The left vigorously defends their absolute right TO KNEEL as a First Amendment issue, not that the left even cares about the First Amendment.

Personally, I don't give a flying fuck about this issue and neither should any sane human being because the FREE MARKET should be sorting it out. The NFL consists of privately owned football teams that generally operate under rules established by the NFL, something that is also their right.

Above all, football is a BUSINESS, a very big and lucrative business.  According to Forbes, the average NFL franchise is worth $2.5 billion and the Dallas Cowboys are worth nearly $5 billion, here.   If the fans don't like the actions of the players and teams, actions that are reinforced by team owners and NFL rules, then the fans can just boycott football and Walk Away.  Decisions have an economic impact.  If ticket sales and revenues nosedive because the fans revolt and cease being fans then the football teams will definitely suffer an economic consequence.

Meanwhile, we have the right demanding that the football players be FORCED to stand for the National Anthem.  Guess what?  It's NOT their right to demand anything.  Heck, even President Trump, who I generally like but disagree with on this issue, has chirped in with recent tweets:

The NFL players are at it again - taking a knee when they should be standing proudly for the National Anthem. Numerous players, from different teams, wanted to show their “outrage” at something that most of them are unable to define. They make a fortune doing what they love......

.....Be happy, be cool! A football game, that fans are paying soooo much money to watch and enjoy, is no place to protest. Most of that money goes to the players anyway. Find another way to protest. Stand proudly for your National Anthem or be Suspended Without Pay!

Lol, 'SUSPENDED WITHOUT PAY' for failing to worship the flag is indeed draconian and ridiculous.  Since when was the NFL required to worship Old Glory?

I 100% endorse the right of football teams to make their own business decisions and they absolutely have the right to make BAD decision that hold the potential to negatively impact revenues and profits.  That's the definition of free enterprise.

How did football even become a political football?  Why is football suddenly a prop for statism and an icon of statist values and worship?

I have a solution: Ditch the playing of the National Anthem and just pay ball! Hello, isn't that what football is supposed to do, or was until it became a stupid political hot potato issue.  Even worse, why has football become just another divisive racial issue, mostly black players vs. white fans?


Of people who identified themselves as part of the NFL fan base 83 percent were white, 64 percent were male, 51 percent were 45 years or older, only 32 percent made less than $60,000 a year, and, to finish the point, registered Republicans were 21 percent more likely to be NFL fans than registered Democrats. Another factoid: NFL fans were 59 percent more likely than the average American to have played golf in the last year. You think the NFL is a lunch-bucket league? Not unless the lunch bucket is from Hermes.
But football’s appeal is more than demographics. The numbers reflect the values of white conservative males. 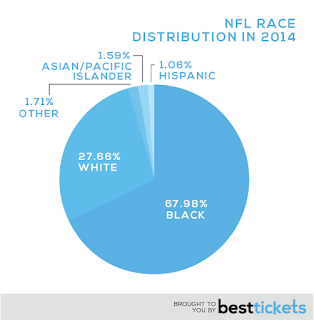 Personally, my biggest problems with football and other major sports is that the teams are all welfare queens who suck up a ton of taxpayer dollars and these taxpayer dollars do in fact subsidize the fat salaries of athletes.  Furthermore, football has been used as a propaganda vehicle by the government and the military industrial complex to worship the military and its missions.  In fact, the Pentagon even pays the NFL.

As an antiwar activist, it's my view that using tax dollars to endorse America's wars is wrong and immoral.  Moreover, I endorse ending our neocon foreign policy and bringing our troops home to defend America, be with their families and NOT be killed in stupid wars.  US foreign policy is nothing more than MURDERING for defense contractor profits and has nothing whatsoever to do with US national security.

Finally, it's my belief that Trump should just butt out of telling the NFL how to run its business; nobody told him how to run his businesses.  Nationalizing sports is a very dangerous thing and renders sports nothing more than bread and circuses for the state.

If the NFL and team owners make decisions that hurt them, so be it. In a free market, customers always rule and fans are indeed customers.
Posted by Judy Morris at 8:38 AM