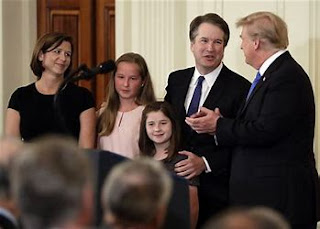 By all accounts, 53 year old Judge Brett Kavanaugh has led an exemplary life without the hint of scandal or stain.  The senate confirmed him 57-36 to the United States Court of Appeals for the District of Columbia Circuit in 2006.

Kavanaugh is well respected as a jurist, a human being and a liberal Democrat feminist had nothing but the utmost praise for him.


Here’s a noteworthy op-ed from Supreme Court advocate Lisa Blatt urging that the Senate confirm the Kavanaugh nomination. Blatt, a former clerk to Ruth Bader Ginsburg and a self-described “liberal Democrat and feminist,” has argued more Supreme Court cases than any other woman. Some excerpts:

Sometimes a superstar is just a superstar. That is the case with Judge Brett Kavanaugh, who had long been considered the most qualified nominee for the Supreme Court if Republicans secured the White House. The Senate should confirm him.…

Because I am a liberal Democrat and feminist, I expect my friends on the left will criticize me for speaking up for Kavanaugh. But we all benefit from having smart, qualified and engaged judges on our highest court, regardless of the administration that nominates them.…

I do not have a single litmus test for a nominee. My standard is whether the nominee is unquestionably well-qualified, brilliant, has integrity and is within the mainstream of legal thought. Kavanaugh easily meets those criteria. I have no insight into his views on Roe v. Wade—something extremely important to me as a liberal, female Democrat and mother of a teenage girl. But whatever he decides on Roe, I know it will be because he believes the Constitution requires that result.…

Democrats should quit attacking Kavanaugh—full stop. It is unbecoming to block him simply because they want to, and they risk alienating intelligent people who see the obvious: He is the most qualified conservative for the job.

WOW that is quite an endorsement. Still, the Democrats are determined to stop his confirmation to the Supreme Court and for no valid reason except to be be jerks and humiliate President Trump.  The Dems plan on taking over Congress in midterms and they want to FORCE Trump to nominate a liberal justice or it's NO CONFIRMATION.

Justice Kennedy's retirement has left the court with 4 conservative justices (Roberts, Alito, Gorsuch, Thomas) and 4 very liberal justices (Gingsburg, Sotomayor, Breyer, Kagan).  Kennedy was viewed as a swing justice because he sided with the liberal jurists on many issues, especially the contentious social issues.

Sen. Diane Feinstein sent a letter to the DOJ demanding an investigation of Judge Kavanaugh for sexual improprieties that occurred when he was high school and the sole accusation was based on an unidentified victim and and a lack of facts.  The FBI refused to investigate this 'nothing burger' of a case.

Feinstein has apparently convinced her to publicly come forward and she has.  Her name is Christine Blasey Ford and she's a liberal California professor and an admitted Trump hater who views herself as part of the resistance.

Her 'let's destroy Kavanaugh' hit piece was through the Washington Post, the most notorious Trump hating newspaper on the planet. Ford didn't just claim that Kavanaugh made a sexual advance at her at a teenage party when he was 16 but said in so many words that he forcibly tried to rape her and even kill her.  That's quite an accusation. An excerpt from the WaPo article, here:


While his friend watched, she said, Kavanaugh pinned her to a bed on her back and groped her over her clothes, grinding his body against hers and clumsily attempting to pull off her one-piece bathing suit and the clothing she wore over it. When she tried to scream, she said, he put his hand over her mouth.

“I thought he might inadvertently kill me,” said Ford, now a 51-year-old research psychologist in northern California. “He was trying to attack me and remove my clothing.”

Ford said she was able to escape when Kavanaugh’s friend and classmate at Georgetown Preparatory School, Mark Judge, jumped on top of them, sending all three tumbling. She said she ran from the room, briefly locked herself in a bathroom and then fled the house.

Blasey herself is apparently very confused about a sexual assault incident that happened 35 years ago and she initially claimed that 4 boys were involved.  Interestingly, the sole witness to the event, Mark Judge, denied that it ever happened!  The Daily Caller reports, here:


Ford claims she told no one of the alleged assault “in any detail” until 2012, when she and her husband were in couple’s therapy. The therapist’s notes, which Ford reportedly provided to WaPo, do not identify Kavanaugh by name.

However, the notes report that Ford said she was attacked by students “from an elitist boys’ school” who went on to become “highly respected and high-ranking members of society in Washington.”

The notes say four boys were involved in the alleged assault, a discrepancy Ford attributed to an error on the part of the therapist. There were four boys at the party but only two — Kavanaugh and Judge — in the room, she said....

Judge has also denied that the incident described in The New Yorker report occurred, telling The Weekly Standard on Friday that the allegations were “just absolutely nuts.”

Feinstein, who has known of Ford’s allegations since July, did not raise the issue during Kavanaugh’s confirmation hearing earlier this month. Nor did the matter come up during a closed session where sensitive information was discussed, according to a Judiciary Committee spokesperson.

In a statement released Sunday afternoon, Sen. Chuck Grassley, the chairman of the Judiciary Committee, took issue with with Feinstein’s withholding of the allegations.

What is going on here?  We have a woman in therapy for marital problems who apparently is still upset that some teen boys hit on her when she was 16.   Any female who dated in high school has stories about a horny dude hitting on her but it's hardly something that folks remember as a traumatizing event that still affects them decades later.  Moreover, her initial report to her therapist claimed there were 4 boys involved in the assault.  Is she seeking attention by attempting to make herself into a 'Me Too' sexual assault victim, especially if it destroys the life and career of a man she hates because of his politics?

After the Washington Post hit piece of a story broke, Mark Judge, the guy Ford claims allegedly saved her from being raped and even killed by Kavanaugh emailed the The Weekly Standard: "Now that the anonymous person has been identified and has spoken to the press, I repeat my earlier statement that I have no recollection of any of the events described in today’s Post article or attributed to her letter. Since I have nothing more to say I will not comment further on this matter. I hope you will respect my position and my privacy."

Remember, it was Judge who had previously told The Weekly Standard "It’s just absolutely nuts. I never saw Brett act that way."

So the bottom line is that we have a women in therapy decades after an alleged sexual assault by 1 or 4 teenage boys who really can't remember much but who still is determined to destroy Kavanaugh with an accusation that happened 35 years ago at a teenage party, and all while the sole witness denied it ever happened.

And this is all the dirt that the Democrats can dig up on Kavanaugh?  I'll use the words of James Comey in his description of the infamous Russiagate dossier - it's 'salacious and unverified'.

It's turning into a classic 'he said, she said' but with the added bonus of a witness who said it NEVER happened.  Of course in the 'Me Too' age, a male is automatically presumed guilty even if the facts are false and unsubstantiated.

This is precisely how the left destroys innocent people and it happens all the time.