Gary Johnson? Why Not if Ron Paul isn't the Nominee? 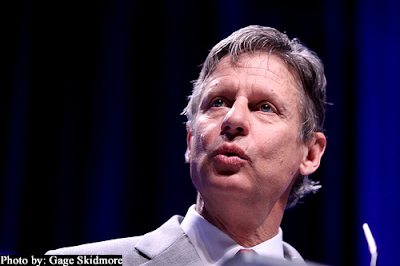 Going into the 2012 Republican primary, informed observers always knew that Ron Paul faced an uphill battle because the Republican Party and its voting base are overwhelmingly dominated by socially intolerant theocrats and warmongering big government statists. The liberty activist faction within the GOP is still a minority, although a growing and vociferous minority. Ron Paul's 2012 performance was a vast improvement over his 2008 performance and his message of peace, liberty and prosperity has captivated the hearts and minds of millions of Americans of all political stripes.

But now that it appears obvious that it's not mathematically possible for Ron Paul to be the Republican nominee (not unless all those Romney/Santorum/Gingrich delegates are closeted Paulites), where do we go from here? Facebook has exploded with "write-in Ron Paul" movements. However, write-ins are rarely counted and many states have banned write-ins.

Liberty activists are not likely to vote Republican if Ron Paul isn't the nominee because they are morally and ideologically averse to just about everything the Republican Party stands for including endless wars, big spending, mountains of debt, corporate welfare queens and chronic assaults on civil liberties. The Republican Party doesn't even seem to be the least bit concerned because it views the liberty activists as an alien invasion by liberals, kooks and irrelevant rabble-rousers. Of course, a sane and astute political observer would indeed be concerned about the loss of such a significant voting block - the young, the politically aware and the fiscal conservatives.

There once was a time when Republican dissidents just held their noses and voted Republican as the lesser of the two evil. But starting in 2006, Libertarians, constitutionalists, Buchananites, fiscal conservatives, paleo-conservatives etc. could no longer even hold their noses and vote Republican; the lesser of the two evils was still quite evil. It's why the Republicans lost the House of Representatives in 2006 and again got crushed in 2008 by the Democrats. The liberty activists either voted 3rd party or just didn't vote.

What should we do?  We need to advance the cause of peace, liberty and prosperity by supporting a 3rd party candidate who at least is ideologically aligned with us on the major issue.  Gary Johnson is such a candidate and as the Libertarian Party candidate for president, Gary Johnson has an impressive record as governor of New Mexico.  Gary Johnson governed as a solid fiscal conservative and defender of the 10th amendment and state rights.

Maintaining a strong national defense is the most basic of the federal government’s responsibilities. However, building schools, roads, and hospitals in other countries are not among those basic obligations. Yet that is exactly what we have been doing for much of the past 10 years.

Given trillion-dollar deficits, America simply cannot afford to be engaged in foreign policy programs that are not clearly protecting U.S. interests. There is nation-building and rebuilding to be done right here at home.

Our military should remain the most potent force for good on Earth. To do this, we should resort to military action as the last option and only as provided in the Constitution.


THE FREEDOMS ON WHICH AMERICA WAS FOUNDED are now under attack from the very people charged with protecting and upholding them.

Habeas corpus should be respected entirely, requiring the government to either charge incarcerated individuals with a crime or release them.

The TSA should take a risk-based approach to airport security. Only high-risk individuals should be subjected to invasive pat-downs and full-body scans.

The TSA should not have a monopoly on airport security. Airports and airlines should be encouraged to seek the most effective methods for screening travelers, including private sector screeners. Screeners outside of government can be held fully accountable for their successes and failures.

Gary Johnson is a thoroughly decent liberty candidate and a whole lot better than either Obama or Romney who together are like two peas in the R and D Uniparty pod.

If liberty activists want to advance the cause of liberty, then Gary Johnson is the best possible choice.

Gary Johnson is definitely on the side of liberty and has been a champion of small constitutional government his entire life. He's got a record to prove it.