What's Wrong With our Primary and General Election System of Voting? A Lot! 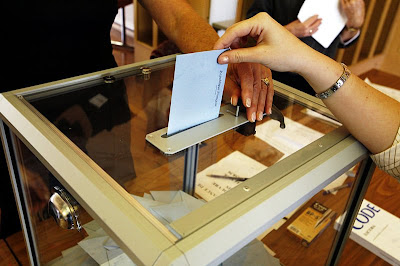 Because of the economy and a lot of other irritating things like bankster bailouts, insane government spending, massive deficits and endless wars, voters are indeed angry and frustrated. In fact, voters are so disgusted with Republicans and Democrats that a Politico piece titled Poll: Most independents in 75 years stated "Almost four in ten Americans, 38 percent, currently identify themselves as independents, a Pew Research Center poll found. This is an increase from 32 percent of Americans who considered themselves independents in 2008 and 30 percent in both 2004 and 2000.".

This is not a situation that bodes well for the Republican Party or the Democrat Party. It's also a darn good sign that Americans are finally waking up to the stone cold reality that both parties no longer even represents the people or their interests.

Republicans and Democrat voters are disgusted by the fact that no matter how they vote, they never get the change they voted for and always just get more of the same old, same old. One of the biggest impediments to more honest elections is the phony baloney left-right paradigm that maintains control and party loyalty. No matter how we vote, at the the end of the day we get more wars, more spending, more corporate welfare, more bankster bailouts and ruthless assaults on civil liberties (Patriot Act, NDAA). Americans need to start voting the issues and forget the manipulative propaganda of the Republicans and Democrats because the R’s and the D’s together constitute The Uniparty.  The voters are just useful idiots that legitimize Republican and Democratic betrayal of the people.

Our political system is thoroughly corrupted to its core.  The RNC and DNC machines are really nothing more than money laundering operations as well as wholly owned subsidiaries of fascist corporate welfare queens, the military industrial complex, the prison industrial complex and the banksters (and Big Pharm, Big Agriculture, Big Energy etc.).

That said, there are vast systemic flaws in our two part voting system consisting of primaries and general elections.

Let's start with primaries.  Supposedly, our primaries exist for voters to select a candidate.  Yet, many states have closed primaries that are restricted to verifiable party members.  IVN.us, a website dedicated to independent voters and their issues, said in a piece titled Independents Call for Congressional Hearings on Disenfranchisement:

In a letter to the editor of AL.com, Bob Friedman, an Independent from Birmingham, Alabama, writes:

In an opinion piece for the Cleveland Plain Dealer, Cynthia Carpathios, an Independent from Ohio cited the same grievance, while reported on work being done by a newly-formed chapter of Independent Voting in the state.

“If I want to remain an independent, I’m excluded from voting for candidates in primary elections altogether, though expected to fund these elections as a taxpayer. That’s just one example of how party privilege trumps voter rights in this day and age.”....

“Independents want reforms that can prevent government from functioning exclusively on a partisan basis: open primaries, nonpartisan elections, nonpartisan redistricting reform, putting independents on the Federal Election Commission and reducing the domination of the parties over the people.”...

“These include closed primaries, restrictions on voter mobility, loyalty oaths, and the enforced bipartisan structure of rulemaking and oversight bodies from the F.E.C...”

But besides closed primaries and 'winner take all' rules, the process is also rigged when it comes to delegate allocation.  Many of the so-called 'at large' delegates are selected by party elites, consist of specially selected boot licking party hacks and absolutely guarantee that 'We the People' are weakened in our ability to choose a candidate.  It's as if the party elites guarantee their own control over the primary system simply because 'We the People' are deemed to stupid too actually make the decisions.

At the primary level we definitely need at least 3 fixes that should be demanded by folks in their respective states.

1.  End closed primaries and make all primaries open to any registered voter, regardless of party.
2.  Abolish 'winner take all' rules
3.  Only allow 'We the People' delegates and ban as delegates all elected officials and party elites.

The primary system must be grassroots driven and definitely not controlled by and or dominated by the party and elected officials.

With regard to general elections, the Republicans and Democrats have created a situation where they have a monopoly on elections, something they accomplish by shutting out third parties or making the creation of a viable third party so impossibly difficult that they are effectively prohibited from competing with the Republicans and the Democrats.  Ballot access remains a critically important issue in most states.

Meanwhile, the battle for fair elections will continue as more and more Americans suffer acute disenfranchisement by the Republicans and Democrats.

Finally, there is the issue of the big corporate money that fuels the RNC and DNC machines and enables the special interest takeover of our elections and government. ‘We the People’ are no longer even part of the equation and process. The Republican and Democrat parties have worked hard to guarantee that! For them, it’s all about raw and absolute power, and getting their campaign coffers filled with special interest dough.
Posted by Judy Morris at 10:16 AM