Why the Return of Glass-Steagall is a Good Idea 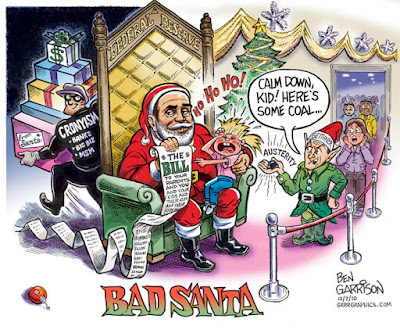 Glass-Steagall was one of the post Great Depression era reforms that made sense because it separated consumer and commercial banking from the go-go banking activities of investment banks. Glass-Steagall survived until 1999 when Bill Clinton, aided and abetted by Republicans and Democrats in Congress, abolished Glass-Steagall. It all goes back to a 1999 piece of legislation signed by Bill Clinton and supported by Republicans and Democrats called the Financial Services Modernization Act (FSMA).

FSMA outlawed the wall of separation from consumer/commercial banking and the Wall Street gambling casino. Why was this a bad thing? Because when we got Banksters Gone Wild, the pretext to bailout the banksters and their gambling addiction was to protect the consumers and their deposits. It was a colossal fraud perpetrated on the American people and Main Street because it enabled the government to bailout the banksters. The gory details of FSMA and the elites behind it are here.

The Goldman Sachs Blessing "May the Lloyd be With You, AMEN"

As the world's central banks teeter on the brink of collapse from bailing Banksters Gone Wild, the world's economies have plunged into recession, depression and despair as profound human suffering escalates everywhere.

While the Libertarian anarcho-capitalist would shudder in horror at the thought of bringing back Glass-Steagall, I submit that in the interest of protecting consumer deposits and stabilizing the drain on Main Street that we need to separate consumer banking from Wall Street who now uses consumer deposits to shore up its capital, liquidity and reserves, a situation that only promotes more go-go high risk banking but with the money of ordinary working stiffs.

The true free market solution to the banking crisis is to just let the gamblers go bankrupt, stop bailing them out and promote the growth of small community banks that once thrived in America.  The world's financial pundits, gurus and Keynesian economists continue to operate on the economic model of bailing out the rich gamblers at the expense of the poor and middle class.  Such a financial model is not only patently absurd but also immoral because it's nothing more than a transfer of wealth from the poor and middle class to the rich.

On a more ludicrous but startling level, the Financial Times, a publication that is notoriously Keynesian and an advocate for thieving central banks, published a piece titled Why I was won over by Glass-Steagall by Luigi Zingales.

The piece is ludicrous because it starts off with the notion that the writer is somehow a proponent of free markets, at least to the extent that he doesn't approve of a forced separation between investment banking and commercial banking that is the defining characteristic of Glass-Steagall.

I have to admit that I was not a big fan of the forced separation between investment banking and commercial banking along the lines of the Glass-Steagall Act in the US. I do not like restrictions to contractual freedom, unless I see a compelling argument that the free market gets it wrong. Nor did I buy the argument that the removal of Glass-Steagall contributed to the 2008 financial crisis. The banks that were at the forefront of the crisis – Bear Stearns, Lehman Brothers, Washington Mutual, Countrywide – were either pure investment banks or pure commercial banks. The ability to merge the two types was crucial in mounting swift rescues to stabilise the system – such as the acquisition of Bear Stearns by JP Morgan and of Merrill Lynch by Bank of America.

But then he nosedives into a perfectly lucid case for the return of Glass-Steagall.

Over the last couple of years, however, I have revised my views and I have become convinced of the case for a mandatory separation.

There are certainly better ways to deal with excessive risk-taking behaviour by banks, but we must not allow the perfect to become the enemy of the good. In the absence of these better mechanisms, it makes perfect economic sense to restrict commercial banks’ investments in very risky activities, because their deposits are insured. Short of removing that insurance – and I doubt commercial banks are ready for that – restricting the set of activities they undertake is the simplest way to cope with the burden that banks can impose on taxpayers.

Luigi Zingales, experiencing a financial epiphany, raises an incredible valid point, namely, that consumer deposits are insured by governments and that the burden on taxpayers in the rescue of high risk go-go gambling activities of investment banking houses definitely has proven to be disastrous.  Moreover, so long as banksters get to operate 'risk free' with other peoples' money, the banksters will indulge in even more reckless behavior and spawn even more bailouts.

Finally Luigi Zingales hits on the real problem of abolishing Glass-Steagall, the concentration of massive power within the financial services industry.


Last but not least, Glass-Steagall helped restrain the political power of banks. Under the old regime, commercial banks, investment banks and insurance companies had different agendas, so their lobbying efforts tended to offset one another. But after the restrictions ended, the interests of all the major players were aligned. This gave the industry disproportionate power in shaping the political agenda. This excessive power has damaged not only the economy but the financial sector itself. One way to combat this excessive power, if only partially, is to bring Glass-Steagall back.

The return of Glass-Steagall won't stop banksters from going wild but it will certainly provide a very important wall of separation that should absolutely inspire the political and public will to end bankster bailouts.  Once the bankster are forced to cover their own gambling losses and even go bankrupt (or to jail), they will learn to make more prudent investment decisions. Above all, the practice of bailing out bankster as a public good to protect consumers is a myth that must be permanently shattered.

How many Americans would love to sit at a casino gambling table knowing that their losses would be covered by taxpayers? Fortunately, ordinary Americans are denied that right but unfortunately, the rich and their banksters are guaranteed that right.
Posted by Judy Morris at 4:09 PM