A Whale of a Nightmare: Government Terrorism Destroys Life and Career of Marine Biologist Nancy Black 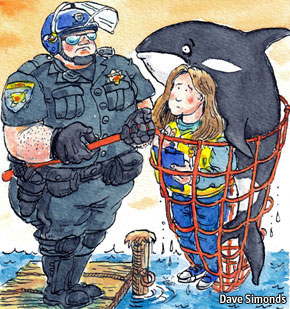 How did whale lover and marine biologist Nancy Black end up indicted, broke and facing 20 years in prison? According to George Will, Washington Post, Black was captain of a whale watching ship and a member of her crew allegedly whistled at the whales which is considered an environmental crime and that was just the beginning of Black's nightmare.


The huge humpback whale whose friendliness precipitated a surreal seven-year — so far — federal hunt for criminality surely did not feel put upon. Nevertheless, our unhinged government, with an obsession like that of Melville’s Ahab, has crippled Nancy Black’s scientific career, cost her more than $100,000 in legal fees — so far — and might sentence her to 20 years in prison. This Kafkaesque burlesque of law enforcement began when someone whistled.

Black, 50, a marine biologist who also captains a whale-watching ship, was with some watchers in Monterey Bay in 2005 when a member of her crew whistled at the humpback that had approached her boat, hoping to entice the whale to linger. Back on land, another of her employees called the National Oceanic and Atmospheric Administration (NOAA) to ask if the whistling constituted “harassment” of a marine mammal, which is an “environmental crime.” NOAA requested a video of the episode, which Black sent after editing it slightly to highlight the whistling. NOAA found no harassment — but got her indicted for editing the tape, calling this a “material false statement” to federal investigators, which is a felony under the 1863 False Claims Act, intended to punish suppliers defrauding the government during the Civil War....

Six years ago, NOAA agents, who evidently consider the First Amendment a dispensable nuisance, told Black’s scientific colleagues not to talk to her and to inform them if they were contacted by her or her lawyers. Since then she has not spoken with one of her best friends.

To finance her defense she has cashed out her life’s savings, which otherwise might have purchased a bigger boat. The government probably has spent millions. It delivered an administrative subpoena to her accountant, although no charge against her has anything to do with finances.

According to the Huffington Post, "The popular whale researcher said more than a dozen armed agents and police raided her house with a search warrant during the investigation, which has put her under enormous stress", here.

Government terrorism against citizens is quite common in Nazified America.  Liberty is vanishing with the speed of light and whale loving marine biologist Nancy Black is just one more victim to add the huge and growing mountain of victims of government oppression and tyranny.
Posted by Judy Morris at 7:56 AM