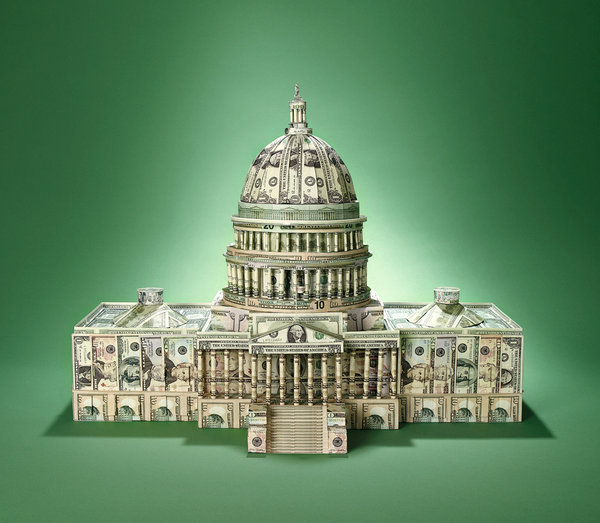 Americans are wildly deluded about their political system and succumb to the comical belief that We the Sheeple People actually choose our elected representatives and leaders. That's a false and scandalous paradigm that needs to be busted wide open and smashed to smithereens.

For starters, the RNC and DNC machines are nothing more than money laundering operations for corporate America as well as wholly owned subsidiaries of the banksters, military industrial complex, prison industrial complex, national security industrial complex, Big Pharm, Big Agriculture and corporatist special interests. It's a game that only exists for one purpose and one purpose only, namely, to concentrated wealth and power while consummating the marriage of Big Business and Big Government. With very few exceptions, nearly all Congress Critters and state legislators are very appropriately attired when they look like this:

Nearly every politician is bought and paid for. Nascar styled logos can easily wallpaper the inside and outside of the White House, Congress, government agencies and the Federal Reserve. For all practical purposes, America is an oligarchy - a nation of the rich, by the rich and for the rich. But the rich in America aren't rich because of free markets or capitalism, they are rich because they get special treatment and are frequently on the public dole.

The Goldman Sachs Blessing "May the Lloyd be With You, AMEN"

Municipal Bonds: A license to steal and taxpayers don't even know they are being financially raped


Washington, DC is full of dirty little secrets and a ton of tax dollars are spent on the propaganda machine that relentlessly stampedes truth, disclosure and accountability. What make this well oiled machine function so effectively is that print and broadcast mainstream media are an arm of the government and is actively complicit in protecting the system and all the corruption and cover-ups that go along with it.

Unquestionably, the U.S. Congress is the biggest and smelliest manure factory on the planet and Americans have become the most delusional folks on the planet for putting their trust in these dangerously worthless Congress Critters by constantly re-electing them over and over.

Democrats and Republicans are the poison roots that have destroyed America, albeit for different reasons. The Democrats cling to their fraudulent collectivist utopianism with promises of giving voters free food, free housing, free healthcare, free transportation, free education, free everything etc. The Democrats are quite upfront about campaigning on a theme of “I will fully utilize the police powers of the government to steal from others to give you what you want but you will only get what I think you should have and that ain’t much”. Voters drink the Fool-aid and grow frustrated, especially when the promised loot fails to arrive. Government never delivers on its promises. The only thing government ever accomplishes is conning folks into relinquishing their liberty, their prosperity and submitting to state tyranny and terrorism.

The Republicans campaign on their phony baloney commitments to vague talking points like freedom, spreading democracy around the world at the point of a gun or F-16, fiscal conservatism, small government, family values and even capitalism. But in fact, the Republicans grow government power, spend like drunker sailors, sacrifice capitalism on the altar of fascism/corporatism, increase spending and in recent years have become The War Party.

President Obama turned out to be just another “controlled” political hack committed to war, non-stop foreign interventionism, screwing the middle class and totally committed to the preservation of thieving Bankster power. It’s become clear that Obama’s shining star is fading rapidly. Instead of change, the American people got Bush on steroids, a bigger commitment to war and the continued slashing of civil liberties, as well as more bloated and unaccountable corrupt governance.

The RNC/DNC lock on political money doesn’t bode well for Americans seeking to raise new candidates and get rid of the “same old, same old” congressional institutionalists who thrive on power, greed and fraud. If you find a candidate that you like and would like to support, you are legally banned from contributing more than $2,500 to that candidate; contributing more than the legal limit makes you a criminal who can be prosecuted for violating campaign finance laws. But you can give millions to the DNC and RNC machines and their PAC's who don’t have that dollar limitation and this vastly contributes to the absolute power of the RNC and DNC. Independent thinking candidates are routinely squashed. Big money only flows to those who can deliver the taxpayer largess to special interest campaign contributors and it’s nearly impossible for any honest politician to ever raise sufficient money to compete with the RNC/DNC money machines. Corporate contributors don’t fund candidates who campaign on “I promise to reduce government power and end the fascist marriage of big business and big government”.

Top campaign contributors always include defense contractors, the Banksters, trial lawyers, big agricultural interests, big pharm and big energy contractors. Except for the trial lawyers who own the DNC, big corporate contributors are not political ideologues. They check their radar screens and simply fund the candidate they believe can win and, therefore, can be bought. If the Republican Party is on a roll because folks are angry with the Dems, money flows to the RNC machine. If the Dems are hot because folks are angry with the Republicans, money flows to the DNC machine. Because Americans were downright furious after 8 long miserable years of Bush/Cheney, it was clear that the Democratic Party was destined to be the clear winner in the 2008 election cycle. With the media hyping Obama as the latest messiah, his victory was easily predicted and guaranteed.

The top 10 corporate PAC contributions for the 2008 election cycle, according to the Center for Responsive Politics, are as follows:

Opensecrets.org reports the top spenders on lobbying for 2008 were:

At the District of Crime Wheel of Fortune 'Pay to Play Game', they don’t sprinkle that kind of dough around DC without getting big paybacks.

Yes, there are folks who truly feel the “LOVE” when it comes to deep affection for Congress, Bush/Obama/Romney, Republicans and Democrats but they don’t include ordinary working stiff smucks – just rich elites, powerful insiders and Banksters.

Corrupt as Congress is, the Banksters are far from the only larcenous gang perpetually drinking from the Congressional Holy Water Font – the cornucopia of crony capitalism. Everybody is lined up because there’s so much dirty money sloshing around in the District of Crime that it is always explicitly clear that Congress genuflects before its masters and those masters are far removed from “We the People”.

How much is spent on U.S. elections at the federal level? A staggering $5.3 billion was spent in 2008 according to the Center for Responsive Politics.

2012 elections? The big money just got a whole lot bigger and the corruption more intensely obvious.  The world and its peoples quietly march toward a global industrial feudalism consisting of the serfs and the masters who lord over them with a tyrannical iron fist..

America is ruled by the biggest crime syndicate in human history. Americans don't complain or even vote them out of office. These days, corruption is just the American way.  Astoundingly, corruption, greed and graft are welcomed as the new normal.