TARP's Neil Barofsky, Who Estimated the Bankster Bailout Could Reach 24 Trillion, is Out With a Tell All Book 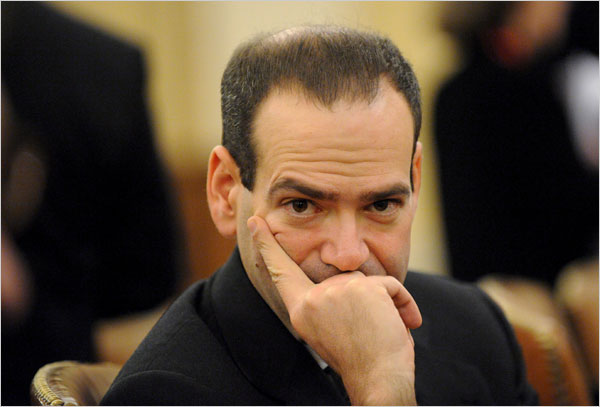 In July, 2009, Neol Barofsky, TARP's Inspector General, said “The total potential federal government support could reach up to $23.7 trillion” according to the New York Times, here.

Barofsky also said “Our goal is to bring transparency, to put things in context.”.   Barofsky was the chief administrator of the bankster bailout program. Fast forward 3 years and Barofksy has left government and is out with a book, Bailout: An Inside Account of How Washington Abandoned Main Street While Rescuing Wall Street, that is highly critical of the bailout.  Barofsky's book apparently unloads on a lot of troubling issues, including the total lack of transparency throughout the entire bailout fiasco. MSNBC reports:


Barofsky’s complaint: Neil Barofsky, who served as the special inspector general of TARP, is out with a Bloomberg op-ed previewing his new book, and this op-ed is highly critical of the U.S. Treasury Department on a number of levels. It’s critical of Dodd-Frank but it’s also critical of the big banks. It provides fodder to both the Tea Party right and the Elizabeth Warren left. Bottom line: It’s a harsh assessment of Washington and Wall Street -- and one that is under the radar right now but gives fuel to the criticism that nothing has really changed. Barofsky, in his op-ed, seems to both be disappointed in Dodd-Frank and simultaneously worried that some of the potential teeth in Dodd-Frank won’t ever come to fruition.

Dodd Frank was a crafty and destructive piece of legislation that actually expanded bankster and Federal Reserve powers under the guise of consumer protection.   That's the standard game plan of the politicos who are bribed with campaign contributions to pass legislation to concentrate wealth and power all in the name of protecting the people.  What a freaking joke!

While Barofsky is disappointed and expected the government to do more for the people, his statist liberal views do in fact disclose some interesting and relevant facts that are documented in his Bloomberg, op-ed piece titled Bungled Bank Bailout Leaves Behind Righteous Anger.

In the year since I stepped down as the special inspector general of the Troubled Asset Relief Program, the sadly predictable consequences of the government’s disparate treatment of Wall Street and Main Street have only become worse. As the banks amass size and power, Main Street continues to get pummeled....

In June 2011, Treasury appeared to take a tentative step toward holding the mortgage servicers accountable for the widespread misconduct in the program by pledging to withhold the incentive payments to three of the largest banks -- Wells Fargo (WFC) & Co., Bank of America Corp. (BAC) and JPMorgan Chase & Co. (JPM) -- until they came into compliance with HAMP’s rules....

In return for what was touted as a $25 billion payout, the banks received broad immunity from future civil cases arising out of their widespread use of forged, fraudulent or completely fabricated documents to foreclose on homeowners....

As a result, the settlement will actually involve money flowing, once again, from taxpayers to the banks.

Gretchen Morgenson, New York Times and always humorously enlightening and delightful because she does suffer from numerous bouts of incredible lucidity for an NYT journalist, wrote her 'buzz saw' piece on Barofsky's book.

Into the Bailout Buzz Saw

His story is illuminating, if deeply depressing. We tag along with Mr. Barofsky, a former federal prosecutor, as he walks into a political buzz saw as the special inspector general for TARP. Government officials, he says, eagerly served Wall Street interests at the public’s expense, and regulators were captured by the very industry they were supposed to be regulating. He says he was warned about being too aggressive in his work, lest he jeopardize his future career.

And so Mr. Barofsky, who formerly prosecuted Colombian drug lords as an assistant United States attorney in New York City, is schooled in the ways of Washington. One telling vignette comes early on in his book, when he is advised by inspectors general in other agencies about how to do his job....

Thus the collision course was set between Mr. Barofsky and a crew of complacent, bank-friendly Treasury officials.

Barofsky learned what sane folks already knew:  the Banksters rule America and the government takes its orders from the Banksters.

We really don't know the true cost of the Bankster bailout, probably because it's a well guarded government secret, in addition to being an ongoing 'rape of the taxpayers' process.  But here's what we have learned from a one time disclosure of the Federal Reserve, not to be confused with Audit the Fed, a bill that never ever gets passed in Congress because Congress Critters also understand who their bosses are.

Have You Heard About The 16 Trillion Dollar Bailout The Federal Reserve Handed To The Too Big To Fail Banks?

I suspect that by the time this whole sinister bankster bailout mess is finished and disclosed that Barofsky's $23.7 trillion bailout estimate will actually be an understatement.
Posted by Judy Morris at 12:05 PM