What Americans Need to Know About the LIBORgate Scandal

With the breaking of the LIBOR scandal, it is indeed instructive on many levels that a prestigious publication like The Economist would title its magazine cover BANKSTERS, Britain's price-fixing scandal and its global impact. LIBOR is the London Interbank Offered Rate and it's a benchmark for setting interest rates.

Most folks in America are snoozing through LIBORgate. This is a huge mistake because the LIBOR scandal has cost American taxpayers and consumers/borrowers a ton of money. According to The Economist article, the LIBOR rate was used to set interest rates on $800 trillion worth of financial instruments.


LIBOR is used to set an estimated $800 trillion-worth of financial instruments, affecting the price of everything from simple mortgages to interest-rate derivatives. If attempts to manipulate LIBOR were successful—and the regulators think that Barclays did manage it, on occasion—then this would be the biggest securities fraud in history, affecting investors and borrowers around the world. That opens the door to litigation not just by the direct customers of implicated banks, but by anyone with a financial interest in LIBOR. The lawsuits have already begun.

To be sure, $800 trillion is a big pile of debt and financial instruments that will undoubtedly affect just about everyone everywhere that ever borrowed money or otherwise was involved in a financial contract.

More importantly, a ton of US municipal bond debt is also pegged to LIBOR. At this juncture, no one has been able to quantify the monetary value of any of the LIBOR interest rate overcharges but the municipal bond business in the US was quite scandalous and corrupt even before LIBORgate broke.

Municipal Bonds: A license to steal and taxpayers don't even know they are being financially raped

Bloomberg reported in 12/2011 that total outstanding US municipal bond debt was $3.7 trillion, here.


The U.S. municipal-bond market is 28 percent larger than reported in June, according to a quarterly Federal Reserve release, which used new data showing individuals own more state and local-government debt.

The face value of outstanding municipal bonds was $3.7 trillion at the end of September...

I suspect that states, counties and cities are attempting to calculate to what extent they got ripped off in LIBORgate.  If they aren't, they should be.

Interest Rate-Fixing Scandal Swindles Baltimore, Other Municipalities out of Millions of Dollars

In 2011, rate hikes cost DC public transport riders over $109 million, and much of that money is going straight to major Wall Street banks. But only recently have observers begun to find out why.


According to a recent report from the Refund Transit Coalition, more than 100 government units nationwide - transit agencies, pension funds, and municipalities - are currently tied into more than 1,100 different debt-swap-deals with major banks.

And a large portion of those deals pegged the interest rates paid out to public-sector investors to the London Interbank Offered Rate, or Libor. Ongoing investigations into Barclays and other major financial institutions have found that banks conspired to manipulate Libor as far back as 2005, resulting in massive profits for some insider-traders and massive losses for thousands of investors around the world.

The city of Baltimore is taking all 19 of the banks responsible for setting Libor to court, alleging that the suppression of Libor lost the city millions on its debt-swapping agreements.

What we actually know about the extent of the LIBORgate fraud is barely the tip of the iceberg or probably more like the head of a straight pin.

LIBORgate is HUGE and it's not likely that any government body can cover it up because civil lawsuits alleging outright fraud will be flying fast and furious. 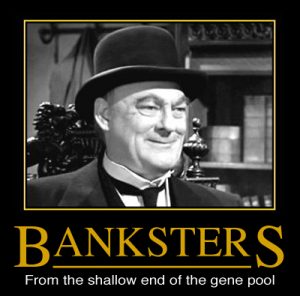